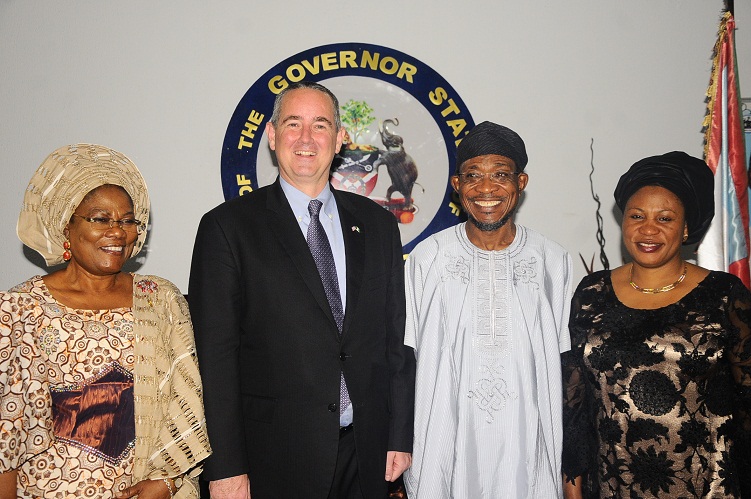 Why we are adopting we are adopting American model in our public school system,   Aregbesola tells American Consul General. The Consul-General of the United States of America in Nigeria, Mr. Jeffrey Hawkins has commended the transformation agenda of the Ogbeni Rauf Aregbesola led administration in the State of Osun.
The Envoy made the commendation while leading a team of American officials to pay a courtesy visit on the governor of Osun at the Government House in Osogbo. Hawkins who was accompanied by the Foreign Affairs Officer of the US in Nigeria, Mr. Matthew Page and the Political and Economic Chancellor, Mr. Rolf Olson lauded the developmental strides of the governor in the state.
He noted that what they have heard about development going on in Osun is impressive and encouraging, adding that the team was not disappointed when it arrived the state and saw the degree at which developmental projects had reached. The Consul-General also applauded the governor for the fantastic stride the administration had taken to reform education in Osun.
“We are highly impressed about the transformation Agenda of Your Excellency. It is encouraging that majority of the projects being embarked on by your administration are nearing completion which shows the commitment to development.
“This trip by us is to see how far you have gone in terms of development which we have been hearing, but we are happy to see that your government is committed to the development of your state.” The Envoy pointed out.
“The economic, social and infrastructural renewal of the state Osun under Governor Aregbesola in the last few years of being at the saddle  of leadership must be applauded. The government’s efforts in reformational development in all facets cannot be glossed over.” Hawkins said.
He urged the state to continue with its transformation of the educational sector, noting that it is a new day for parents and pupils of public schools in Osun.
In his response, the governor thanked the team for their commendation and promised that his administration will not relent in doing that which is good for its citizens.
The governor noted that there is so much to be learnt from America by the state of Osun and the Country at large, saying that American democracy and federalism remains the greatest latitude in the definition of good governance.
According to him,”America is a nation that every country on earth must love, America means so much to all citizens of the world, America is the greatest example of Federalism which Nigeria is struggling to build. America is a model to be studied to see how we are doing it terms of Federalism.”
Governor Aregbesola told the visiting American team that the rot he met on the education sector compelled his administration to find solace in the American model of school system.
Speaking on re-classification of public schools in Osun, the governor said, “here in February 2011, we organised Education submit, we felt we must reorganise, we are working seriously today to restructure our education system which is adopting the American System of elementary, middle and high school system.”
Aregbesola revealed that in repositioning the state his administration has continuously built an African society where man is ultimately the focus.
The governor also added that, in tackling the trend of frightening unemployment, the state through youth leadership training and discipline has translated to environment of peace and security.
Senior officials of the Aregbesola administration who accompanied him in receiving the officials include the Deputy Governor, Otunba Grace Titi Laoye Tomori, Chief of staff Alhaji Gboyega Oyetola, Commissioner for Finance, Dr. Wale Bolorunduro, Director General Bureau of Social Services, Barr. Femi Ifaturoti, Director General Office of Economic Development and Partnership, Dr. Charles Akinnola and others. 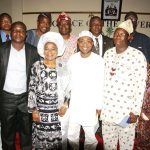 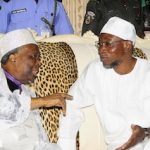