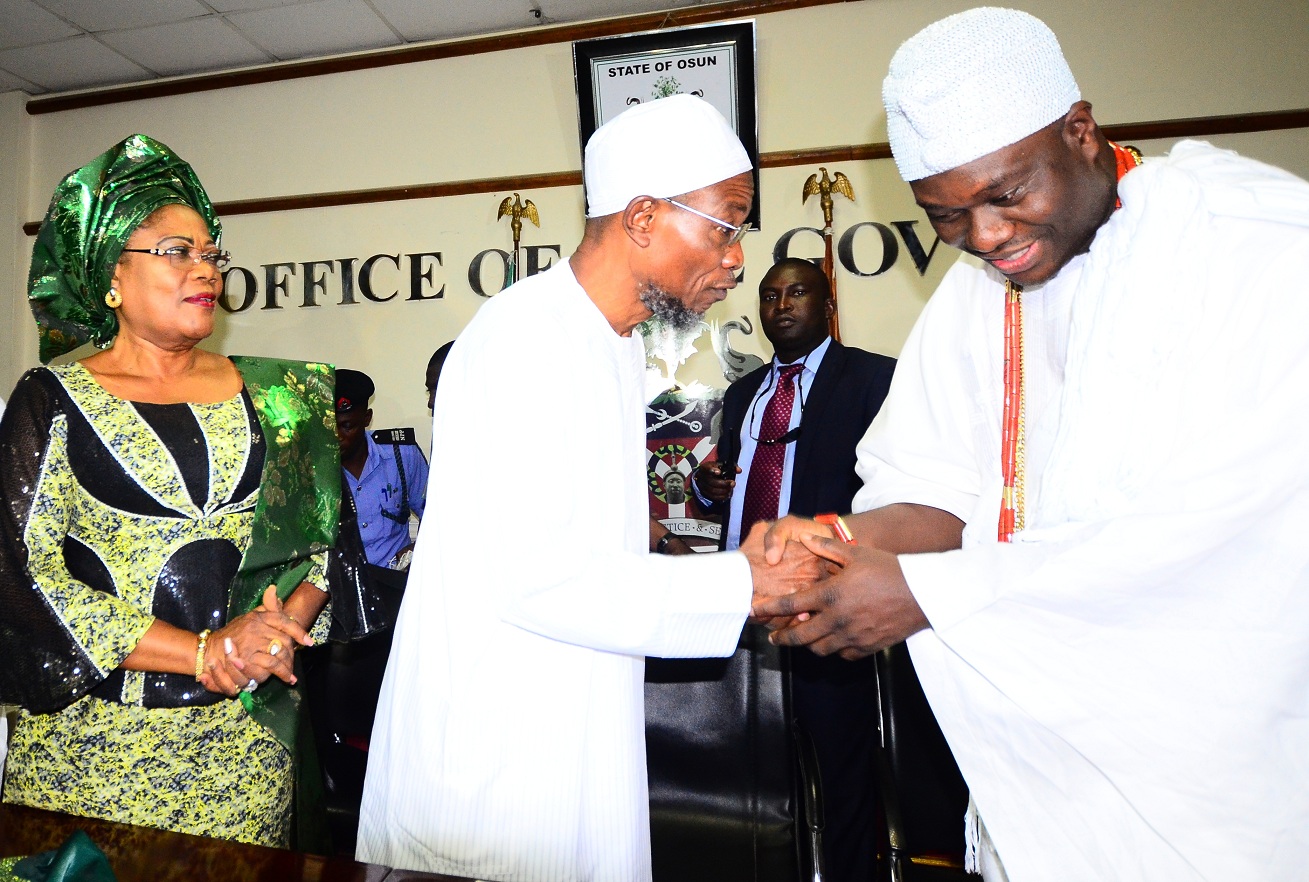 The Ooni of Ife, Oba Enitan Ogunwusi, Ojaja II, has commended the maturity of the Governor of Osun State, Ogbeni Rauf Aregbesola, in his handling of the illegal entry of ‎Ife locals and residents into the Shasha forest in the state to avert crisis.

‎This was even as the Governor noted that his government will do everything possible to avoid being confrontational with monarchs in the state, but seek amicable ways of resolving issues that will affect the peace in the state.
Aregbesola and the Monarch stated these‎ at an interactive meeting called by the Governor preceding the issuance of a white paper by the state government over the illegal entry, demarcation, allocation and farming at the Shasha Forest Reserve in Ile-Ife.

The Ooni of Ife lauded Aregbesola for always adopting dialogue to engender peace in the state since assumption of office, adding that the Governor had been consciously prioritizing public opinions and views in conflicts and disputes resolution.

According to Oba Ogunwusi: “What we are witnessing here today is a challenge to other leaders. We should develop Government-community relationship, if we do that, there will be peace across Nigeria.
“This does not apply to Osun alone. It must go far as the Niger-Delta and the North. Whatever decision governments want to make, they must carry the locals along.‎

“Governor Aregbesola has all the executive rights based on the Land U Act of 1978, so far the land is meant for public use. But in the good spirit of Government-community relationship, for us to avert security issues, that is why we are having this interactive session on Shasha Forest Reserve.

“He could just sign off the land and damn all the consequences and we that are living within that community, the spill over of such a thing will first of all affect us either positively or negatively and we don’t even know where it can lead to. We don’t pray for a bad situation.

“Mr. Governor has displayed good leadership by engaging us, we thank you for giving us the opportunity to put our own position across.”

Ola Ogunwusi said no efforts would be spared in supporting the state’s efforts at ensuring peaceful resolutions over the disputed Forest Reserve, which, according to him, has been illegally encroached on over the years.
Oba Ogunwusi attributed the importance of forest reservation to human existence as un-quantifiable, saying no nation can survive without proper maintenance of her natural environmental endowments.
He said it is very important for any ideal society to have some reserves kept not only for socio-economic advantages but for environmental protection.

He said: “I have been a proponent of replacing nature of tree being fell at this reserve because with my various researches on this, I came to realize that it is very important for government and the community to be on the same page because people have been very lawless as regards the forest.”
Earlier, the Governor called for continued peace and harmony among the citizens saying his government adopted dialogue as the only panacea to promote sustainable peace and harmony.‎

He described wide consultation and dialogue as veritable ingredients to peaceful cohabitation among the citizenry, noting that his government is being cautious not to have any friction with the Ooni of Ife and other monarchs in the state.

Aregbesola frowned at what he described as illegal exploitation of government treasury at the Forest Reserve which according to him has caused a lot of setback over the years.
Governor Aregbesola urged residents and citizens to support his government in championing peace and harmony,warning against any move to disrupt the peaceful atmosphere currently enjoyed in the state.‎
The Governor reassured that no stone would be left unturned by his government at ensuring peaceful cohabitation of the citizenry especially on the need to ensure proper and adequate protection of her natural habitation and forests.

He said: “Everything in life is relative and subjective. Absolutism is almost impossible in human affairs and relationship and it is on that purpose and reason that I deemed it very necessary to have Ooni here, so that we can have his first-hand knowledge of steps that are necessary for the conservation of our forest reserve and the management of all relationships associated with the reserve.