No Plan To Introduce Fees In Our Schools – Osun govt 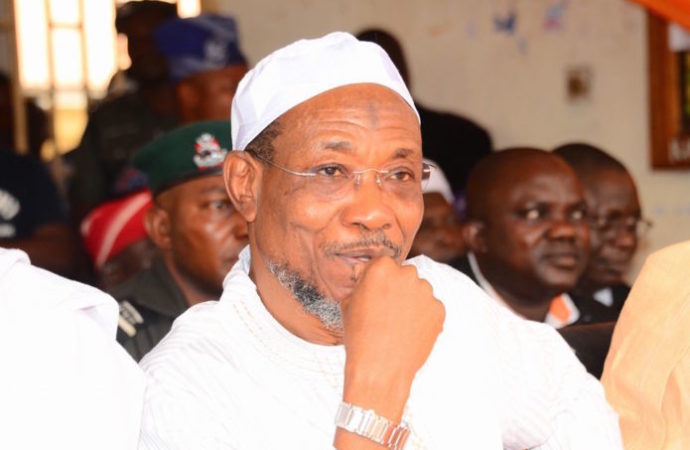 The government of Osun has described as mere rumours the claims that the state has ordered payment of fees in its public schools across the state.

A statement by the Bureau of Communication and Strategy signed by its Director, Semiu Okanlawon, quoted both Governor Rauf Aregbesola and his Deputy, Mrs. Grace Titi Laoye-Tomori, as debunking this while hosting the newly elected executives of the National Association of Osun State Students, NAOSS who were on a familiarization visit to him.

They were joined in hosting the students union leaders by the Secretary to the State Government, Alhaji Moshood Adeoti; Chief of Staff. Alhaji Gboyega Oyetola, Head of Service, Mr. Sunday Owoeye and others.
The governor said education in the state still remains free despite the excruciating economic condition facing the state and the country.
Aregbesola stated that qualitative and functional education, particularly at the lower level is very important and must not be neglected and abandoned by any responsible government, which is why he has continued all education policies in state regardless of the shortage in allocation and the economic meltdown.
Aregbesola had asked his Deputy, Mrs. Laoye-Tomori, to clarify before the student leaders, issues surrounding the rumoured introduction of school fees saying that her explanation would help douse tension.
Laoye-Tomori told the new executives of student union bodies that on no account has the administration ordered the parents to pay fees.
She explained that the state in agreement with parents and guardians, only introduced school infrastructural maintenance levies which according to her, are to ensure proper maintenance of all the newly built  schools in the state.
She explained, “Let me make it clear to the residents of this state that our government did not introduce payment of school fees in any of our schools across the state.
“We did not also ask any of our pupils or students to pay tuition fees as being speculated around the state.
“We have only directed all the pupils in Elementary Schools to pay N2000 in three tranches per annum. The pupils in this category will pay N1000 first term, and N500 each for second and third terms.
“For Middle School, they are to pay N3000 in three tranches per annum. The students in this category will pay N1000 in each of the three terms while High School students are to pay N6000 per annum at N2000 per term.
“This is not school fee but rather maintenance levy because it is only introduced to pupils and students of our new schools not those in the old schools.”
She explained that the state with the stakeholders arrived at the decision having widely consulted the parents, guardians, teachers and other stakeholders in the education sector on the need to sustain the tempo of proper maintenance of the modern school buildings across the state.
She said, “It was on this note that we collectively agreed on the certain amount to be paid in order to keep the facilities procured in each of these schools in good condition for the present and future use of our children.
“So, this money is not meant for government but rather to maintain, sustain and protect the huge investment made in these schools.”
The Governor was also quoted as telling the student union leaders that the efforts to provide very conducive learning environment must not be allowed to go in ruins.
Aregbesola said, “As we all know that this administration has prioritized education with huge investments, we must equally do everything possible to ensure the sustainability of our efforts at ensuring that the edifices we built across the state are properly and consciously maintained.
“There are many universities in Nigeria that are incomparable with our high schools in terms of infrastructures. That is why we want these facilities to be properly handled and taken care of.
“If government should leave the students to use these facilities as they want, they will surely bastardize them in no distant time. Despite the fact that we introduced Community Based Monitoring Team in all the communities where we have these new schools, all we experience is damage and destruction of the facilities.
“So as to halt the rapid dilapidation of the school facilities, we must just have to arrive at this decision,” the governor added.
The Governor who also lamented over the poor appearances of some pupils in some of the public schools however, charged the parents to be more dedicated and committed to the welfare of their children by ensuring that their wards are well equipped, dressed and kitted for schools.
“It is an aberration for parents to be well dressed only for their school children to be in rags,” Aregbesola said
Seeking collaboration from the leadership of NAOSS, Governor Aregbesola said it is high time for the students movement and the state to further cement relationships at enhancing quality education.
He said, “As we all know that this state has done a lot in terms of Social Protection Programmes that had positively impacted in the lives of our people, we equally standout above other states when it comes to educational infrastructures development.
“Though, this is not enough, as we also need collaborations and supports from a body like NAOSS to further improve on the template of transforming and developing our state.”
She also explained that the Education Trust Funds that has been reintroduced by the state government,was part of government’s efforts to revamp the education sector.
She explained the Education Trust Fund had been there but was never enforced adding that the N1,500 at N500 per term is aimed to adding more to the efforts to revamp the education sector.
Earlier, the NAOSS National President, Comrade Oladejo Bashir, commended Governor Aregbesola for building sound minds through the provision of quality education.
He saluted the Governor on his swift response to the ownership crisis of Ladoke Akintola University of Technology, LAUTECH, Ogbomoso, saying the peaceful resolution of the crisis has been yielding positively.
He said, “We appreciate your efforts and contributions so far especially at finding a common ground on the crisis that had rocked the two of the state-owned tertiary institutions- LAUTECH and Osun State College of Education (OSSCE).
“In fact, you have liberated us from the shackles of political impostors, imperialists and oppressors in the education sector. We are proud of your laudable achievements.