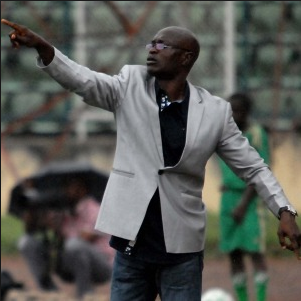 The Osun Government has unveiled new Chief Coach for the state-owned football club, Osun United FC (formally Prime FC of Osogbo).
The new coach, Duke Udi, was presented to newsmen by Gboyega Oyetola, Chief of Staff to Gov. Rauf Aregbesola, in the company of the club Chairman, Taiwo Ogunjobi, in Osogbo on Tuesday.

Oyetola said that the state government place a high priority on sports development.
“Sports is important to the human life that is why the state government is giving sports development and the Osun Utd the needed support.
“Despite the scarcity of funds in the state, the state government ensured that the club was provided with needed funds to achieve the required results and perform optimally,” he said.
In a remark, Ogunjobi said the new coach was an accomplished footballer during his playing days.
“Udi played a vital role in the victories recorded by the 3SC in the mid-90s.
Ogunjobi said that Udi was selected on merit after screening.
“Though, no one is perfect, the management of the club had made a right choice in his selection,” he said.
Udi expressed gratitude to the state government and the management of the club for giving him the opportunity to coach and lead the team.
He, however, ask for the support of all stakeholders in the club to deliver on the mandate given to him, to qualify the team for the premier league.
“We need everybody’s support to move the club to the premier league, so I need everybody to move with me in the right and same direction.
“I came to this club to make a statement and deliver on my mandate, I am not promising anything.
“But I will give my best and I pray my best will bring the required results,” he said
The News Agency of Nigeria (NAN) reports that the management of the club on Jan. 6, announced Udi as a new coach of the club.
He was selected out of 27 coaches, who applied to handle the club through the 2016/2017 Nigeria National League (NNL) season.
The 41-year-old former Giwa FC and Rangers International coach, would be assisted by Bayo Adesina, Kazeem Oseni and Ajayi Obe, as assistants coaches.
Tunji Baruwa would serve as the goalkeeper trainer.