CAC President lauds Oyetola on good governance​ ​ ​ ​ . As JABU is set to confer doctorate​ award on him

President of the Christ Apostolic Church (CAC) Worldwide, Pastor Abraham Akinosun, has commended Osun State Governor, Adegboyega Oyetola, for providing​ good leadership and governance in the state, describing the administration’s performance in the last one year as superlative.​

This is as Joseph Ayo Babalola University (JABU), Ikeji Arakeji, owned by the CAC is set to confer an award of Honorary Doctorate Degree (horis causa) in Public Administration on Governor Oyetola at its next convocation ceremony slated to hold on January 17, 2020.

Akinosun, who gave the commendation on Thursday during a courtesy visit by the Management of JABU, maintained that the governor’s achievements in the last one year traversed all the sectors of the economy.​

He said the university counted him worthy of the honour in view of his remarkable achievements in the State, adding that Oyetola is running a government with human face.​

“We are here to congratulate Mr. Governor and appreciate his superlative performance in the last one year. No doubt, his achievements cut across all the sectors of the economy, including the​ development of infrastructure and human capital.​

“This is why the University Council and the Board of Trustees have come to express our appreciation in concrete terms by awarding Your Excellency​ with Honorary Doctorate Degree in Public Administration in the coming Convocation holding in January, 2020.​

“We also appreciate your support for the church and the university and wish you a successful tenure. As you enter with dignity, so shall you end with dignity,” Pastor Akinosun stated.​

In his remarks, Governor Oyetola commended the University for promoting best practices by training entrepreneurs and business men and women for the benefit of the nation.​

He expressed the administration’s readiness to partner with the university to advance knowledge and skills acquisition in the state.

Governor Oyetola who appreciated the kind gestures extended to him for the honorary Doctorate Degree in Public Administration by the management of the institution, promised to see the honour as a challenge to continue to impact more on the lives of the people of the state.

“I am happy and honoured to receive you. I want to commend the management for running a first-class university. There is no doubt that your products are good, disciplined and committed. I am proud to have you in our state.​

“I commend the management for running a programme that is first class. I commend you for being a university where business men and women are trained. I commend you for performing your corporate social responsibility in supporting the state by paying your tax regularly.​

“We are ready to partner with the university on development. But then we have a lot of infrastructural decay to attend to. When I went round to do a thank you tour, the song in people’s mouth was request to fix the roads. Thank you for considering me worthy of an Honorary Degree.​

“It comes to me by surprise. The fact that I am an alumnus of a great university makes me to appreciate it the more. I look forward to the date,” the governor said.​

Earlier in his remarks, the Pro- Chancellor, Joseph Ayo Babalola University, Pastor Anthony Imevbore, commended the administration of Governor Oyetola for investing in the education sector.

Imevbore, who described the university as a major employer of labour since its establishment in 1996, declared the university’s readiness to collaborate with the government towards the advancement and actualisation of quality and functional education in the state.

He appealed to the state government to partner with the university particularly in the area of vocational and technical education as part of efforts to promote entrepreneurship skills. 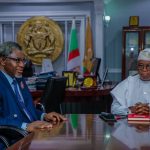