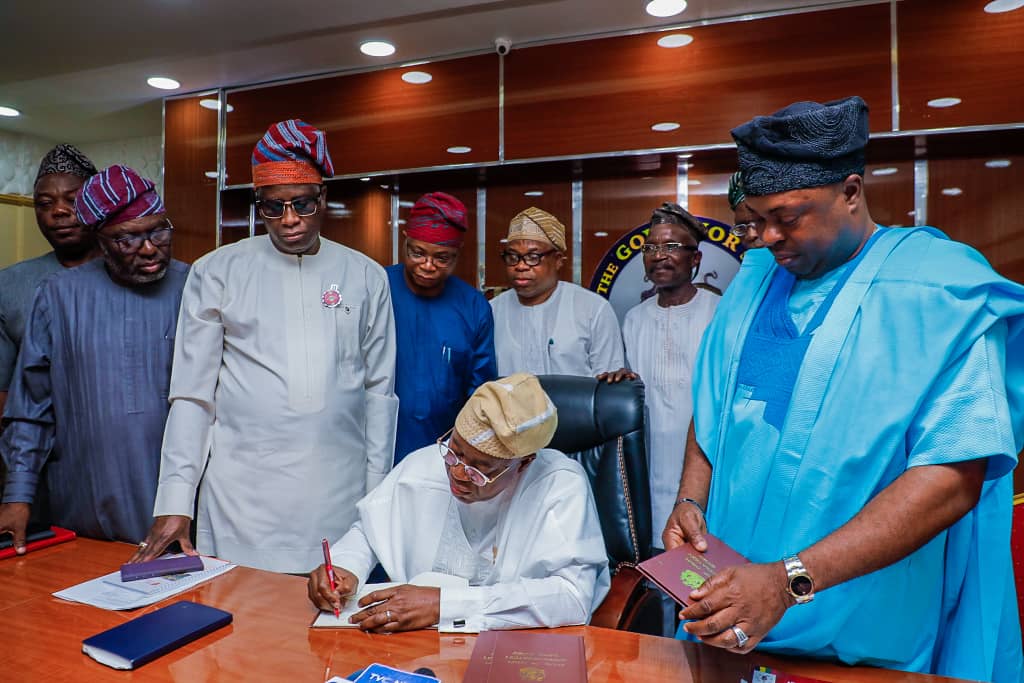 Governor Adegboyega Oyetola of The State of Osun has signed the year 2020 budget into law, just as he promised its full implementation.

He signed the budget in his office on Monday shortly after it was formally presented to him by the Speaker, Osun House of Assembly, Rt. Hon Timothy Owoeye.

This is even as the Speaker, Osun House of Assembly, Rt.  Hon. Timothy Owoeye, noted that it was the first time in the history of Osun that the budget for the next year will be completed and signed into law before the beginning of that year.

Oyetola, who described the size of the budget as most realistic, said the government would stop at nothing to ensure it full implementation.

He said the government decided to prune down the size of the budget compared to the 2019 budget, having realised the socioeconomic realities and limited resources available to the state.

The  governor  who promised to continue to do things that would make life more meaningful, worthwhile and abundant for the people of the state, assured the residents of better days in the year 2020 and beyond.

He said the state would do everything possible to bring about the desired development across all the sectors as captured by the budget.

While commending the leadership and members of the State House of Assembly for a job well done, Oyetola  promised to maintain the level of understanding and cooperation existing between the three arms of government in general and the legislature in particular.

He added: “I am particularly delighted we were able to conclude the presentation, passing and signing of the year 2020 budget before the end of the year 2019.

“I must commend the leadership of the House of Assembly — the Speaker and other principal officers — for ensuring smooth passage of the budget and for ensuring they look at the budget critically which is ready for signing today.

” That is to show that we are ready to move the state forward come Year 2020. We do believe in budget size that will enable us carry out proper implementation. That is the essence of what we are doing today.

“The 2019 budget which is coming to an end two days from now, was about N154billion, but we realised that we didn’t have too much of the revenue that we budgeted. So, we decided to trim down this year’s budget size to a size that we believe is realistic. And with it, we will be able to do a lot for our people within the limit of our resources.

“We commend the members of the House of Assembly for their cooperation and support. I must also commend you for your spirit of oneness. There is no doubt that we have enjoyed a very robust cooperation from you and we promise to continue to do that. We thank you for seeing us as partners in progress.

“The way we went about the budget actually confirms that the leadership of the House is with us, particularly for the timely passage of the budget, unlike some states where there will be issues relating to budget size. We had gone through it together even before it was prepared, presented and signed.

“I thank the people of the state for believing in our government. The commendations we have received so far have been quite encouraging and I look forward for the same cooperation in the subsequent years, particularly in Year 2020”.

Earlier in his presentation, the Speaker Osun House of Assembly, Rt.  Hon. Timothy Owoeye, who described the signing of year 2020 Osun Appropriation Bill as unique, noted that this is the first time in the history of Osun that the budget for the next year will be completed before the beginning of that year.

He described it as a show of commitment of Governor Oyetola to Fiscal Transparency, Accountability and Sustainability.