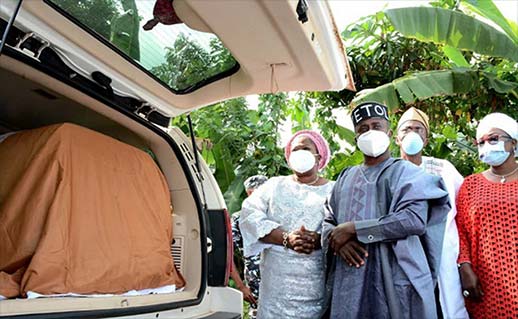 As part of safety requirements against COVID-19, the State Government of Osun, Tuesday , officially handed the remains of the late Senator Ayorinde Fasanmi to the Ekiti State Government, for his interment at Iye Ekiti.

Similarly, Governor Adegboyega Oyetola was part of the eminent personalities who thronged Ekiti State on Tuesday, to pay their last respect to the late Afenifere leader.

Represented by his Deputy,  Mr. Benedict Alabi,  Oyetola noted that but for the late Pa Fasanmi’s wish to be buried in Ekiti, Osun would have concluded all the burial rites in the State and buried the late politician in the State.

The short farewell  ceremony took place at Itawure, the border of the two states.

This was done to avoid breaching the COVID-19 social distancing protocol at the venue of the internment.

Tuesday’s hand-over followed a well coordinated Commendation Service held in the deceased’s honour amid strict safety protocols supervised by the State’s Ministry of Health at All Saints Anglican Church, Osogbo, and hosted by Governor Oyetola.

The State of Osun was represented at the hand- over ceremony by the Honourable Commissioner of Information and Civic Orientation, Mrs Funke Egbemode; Honourable Commissioner for Culture and Tourism, Dr. Adebisi Obawale; Special Adviser to the Governor on Public Health, Dr. Siji Olamiju; Special Adviser to the Governor on General Administration, Mr Niyi Idowu.