The Deputy Inspector General of Police in Charge of South West, Leye Oyebade, has assured that the police would redouble efforts to ensure that peace reigns in the state of Osun.

The DIG gave the assurances during a courtesy call on Osun State Governor, Adegboyega Oyetola, at the Okefia Government House, Osogbo, following an attack on him, looting and vandalization of government and private property by hoodlums in the wake of the #ENDSARS protests.

Oyebade stated that the Inspector General of police has given order to the police to take over the space to protect lives and property of Nigerians.

He alluded that those who carried out the acts were not protesters and would not be allowed to continue unleashing terror on the society.

“Those outside now are not protesters and we cannot allow them to continue that way. The IGP has given us the order to take over the space and we will communicate to members of the public on why peace must reign”.

“We will embark on consultations and meetings to engage the people. Where there  is a lacuna, we will fill in the gap. We are going to work in synergy with other security agencies. All of us must come together as one to assist in moving the State to the next level”.

The DIG who was a former Assistant Inspector General of Police of the then Zone XI covering Oyo, Ondo and Osun States, described Governor Oyetola  as a man of peace and assured him of the cooperation of the police in securing the State.

Reacting, Governor Oyetola, who commended his security aides for living up to expectations during the penultimate Saturday attack on him, restated that it was a pre-planned attempt on his life.

“My instinct was telling me not to go there because two days earlier, we heard them shooting into the air.

“It was supposed to be a peaceful protest, but when you are carrying dangerous weapon, guns, cutlasses, axes, it is no longer peaceful. I thank God for saving my life”, the Governor explained. He also extended his appreciation to President Muhammadu Buhari, the Chief of Army Staff, the Inspector General of Police, Director of DSS, the Air Force, the head of Security and Civil Defence Corps and others for their roles in ensuring that peace returns to the State. 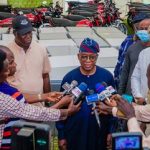