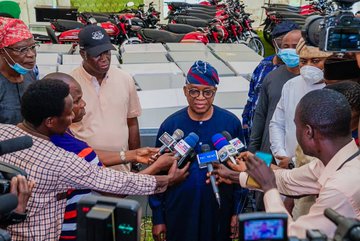 The Osun State Governor, Gboyega Oyetola while inspecting the recovered looted items today, said that he will meet with the head of security agencies in the State tomorrow, to review the current security situation on the state and thereafter consider relaxing the curfew.

Oyetola revealed this on Tuesday on his official Twitter handle.

According to him, “This afternoon, I inspected looted items that have been recovered so far. I urge persons still in possession of stolen items to return them within the Amnesty period which expires in 24 hrs. Those who refuse to return looted items won’t be spared; they’ll be tracked & prosecuted.

“On the curfew, we’ll meet with heads of security agencies in the State tomorrow, to review the current security situation in the State & thereafter consider relaxing the curfew. The curfew wasn’t imposed to inflict hardship on our people but to return normalcy to the State.”

DIG Oyebade visits Oyetola, says police will redouble efforts for peace to reign in OsunOctober 26, 2020
CACOVID yet to flag-off its Palliatives in Osun - Relief C'ttee SecretaryOctober 28, 2020