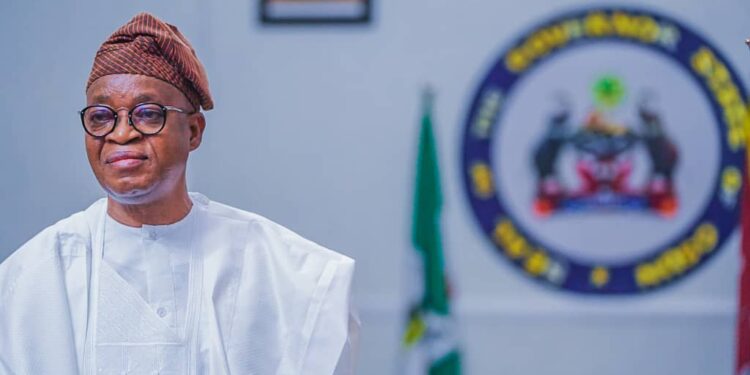 The Governor of the State of Osun, Adegboyega Oyetola has reiterated the administration’s commitment to championing the cause of the youth in the State.

The Governor said his administration would not rest on its oars until the youth are productively engaged to meet their destinies for greatness and prosperity.

Oyetola noted that the State had come up with workable and realistic “Youth Policy” painstakingly designed to fully harness the limitless potential embedded in the youth for the maximum advancement of the State.

Oyetola said these on Wednesday at Government House Osogbo, during the inter-religious prayer session led by some Muslim and Christian leaders to pray for sustained peace, unity and stability in the country.

Governor Oyetola who described the violence that disrupted the peaceful EndSARS protest as unfortunate, noted that the move had raised the leadership’s consciousness to service to humanity.

He said the administration under his watch would continue to maintain the tempo of inclusive and participatory governance as part of efforts to enhance equitable and even distribution of resources.

Oyetola reiterated the avowed determination of the government to youth development in the state.

He said the two percent of the total budget earmarked for the youth in the 2021 budget would be judiciously utilised to engage them in mining, agriculture, tourism, commerce, among others.

“On our part, we will continue to engage our youths so as to let them have sense of belonging in governance. We will continue to prioritise their welfare and invest in them for the betterment of our dear state.

“Though we cannot solve all the problems in a day, with patience, we shall overcome the challenges.

“We want our youths to build some level of trust in their leaders. Leaders mean well. Though at times, it might not work out the way it is expected, by and large, nobody is willing to have the opportunity of ruling the state or country without a desire to do well.

“So, I urge our youths to begin to exercise patience and always be conscious of those with ulterior motive to either hijack their peaceful protest or use them for evil things whenever they want to register their grievances”, he added.

Governor Oyetola who described the special prayer session as timely and prompt, said the administration has been waxing stronger because of his belief in the efficacy of prayer.

He lauded the convener of the prayer who doubles as the Osile Oke-Ona Egba, Oba Adedapo Adewale Tejuoso, and other religious leaders for considering the State worthy and for taking Osun as the point of contact to other states in their choice of prayer for the nation.

“I feel great for this special prayer. The prayer has been very deep and I believe in the efficacy of prayer. I am fulfilled by this visit. My own is to thank God for what He has been doing in our lives as individuals and residents of the State.

“I also thank God for giving us the opportunity to host this prayer session. What happened before and during the time that COVID-19 pandemic was ravaging the world shows that only God determines what happens tomorrow.

“He has proved Himself as the Beginner and Finisher of the world and things therein. I am happy for this combined prayer session. It is a testimony to the fact that there is unity among our people.

“So, I must thank the convener of the prayer — the Kabiyesi — for taking time to come with this delegation to come and pray for our nation, particularly our State to continue to experience peace and unity”, Oyetola added.

In his remarks, the convener of the prayer and Osile Oke-Ona Egba, Oba Adedapo Adewale Tejuoso, commended Governor Oyetola for his strong belief in the efficacy of prayer.

Speaking on the choice of Osun for the special prayer, Oba Tejuoso said the leadership of the faith decided to take the prayer to the State in compliance with the divine message received.

He urged Nigerians, particularly those in the positions of authority, to continue to dedicate their times to prayer for the country as the nation is going through trying times.

Also, a member of the delegation, Bishop Kayode Williams, who led the Christian prayer, extolled the level of dexterity displayed by the Governor to host the delegation for special inter-religious prayers.

Prayers were rendered to beseech God for sustainable peace, unity and stability; and to ensure immediate restoration of the nation’s glory, cleansing of individuals’ sins and total deliverance.