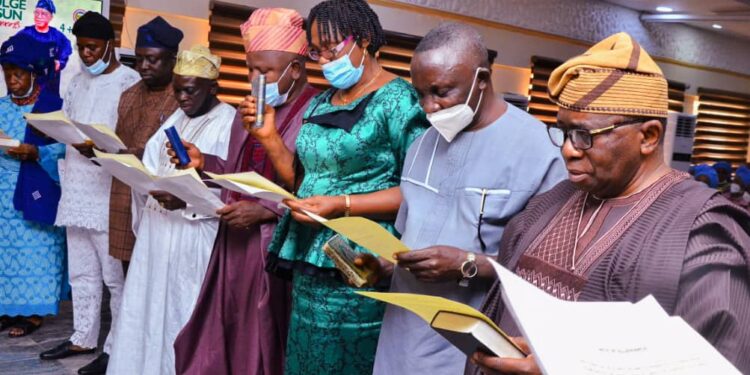 …charges them to hit the ground running

The Governor of Osun, Adegboyega Oyetola, on Monday swore in chairmen and members of non-statutory boards and parastatals.

The appointment of the new hands was to complement government’s efforts towards equitable delivery of quality and qualitative services and democratic dividends to the citizens across the sectors of the economy.

This is even as the Governor charged the new appointees to serve with the fear of God, put in their best service possible anchored on the values of truth, honesty, transparency, incorruptibility and inclusiveness.

Addressing the people at the swearing-in ceremony, held at the parking lot and the Exco Lounge respectively, Governor’s Office, State Government Secretariat, Abere, Osogbo, Governor Oyetola said the appointments would go a long way to effect drastic changes in the various institutions and organisations to which they have been appointed to serve.

Governor Oyetola, who described the appointment as a necessity to further impact positively the lives of the citizenry, noted that the institutions and organisations that the new appointees were expected to head remain the critical engine rooms through which government delivers important social services available to the people.

Governor Oyetola said his Administration has laboured stridently in building an economy that works for all, hence, the need to continuously and meticulously nurture a resilient economy, vibrant in its diversification, and sustainable in its approach to development, so as not to only enhance the quality of lives of the people, but to also place it on a firm footing of irreversible prosperity.

“Despite our widely- acknowledged lean resources, we have consistently demonstrated prudence and we have done much with so little.

“This is because we believe that scarce resources cannot be an excuse for non-performance and that governance without impact is a monumental waste of the people’s mandates and time.

“Therefore, this call to duty is an opportunity to write your names in gold, by giving, in the tradition of this Administration, your best service possible, anchored on the values of truth, honesty, transparency, incorruptibility and inclusiveness.

“By this appointment, you are expected to discharge your responsibilities with the fear of God, putting our people first and putting the interest of our State above any other gain, in a manner that makes you and the institution in which you serve unblemished.

“Whatever gains you see that we have achieved across the diverse sectors of our economy — the bold transformation of the health sector, focused infrastructural development, consistent implementation of welfare packages for our workers, and many more — are all products of deliberate, strategic and focused governance inspired by fidelity to our electoral mandate and absolute trust in and fear of God.

“It is this excellent service delivery tradition that you are inaugurated into and I count on you, just as the teeming population of our proud citizens also do, that you will not fail, but make your service count in the progress and upliftment of this State,” he added.

Speaking on behalf of the appointees, Board Chairman, Osun State College of Education, Ilesa, Elder Kunle Odeyemi, commended the Governor for finding them worthy of service in various capacities.

Odeyemi, who assured of efficient and effective service delivery, pledged on behalf of his fellow appointees, not to disappoint the State as they were resolute to justify the purpose for which they were appointed to serve the people of the State. 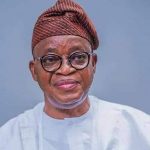 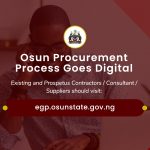