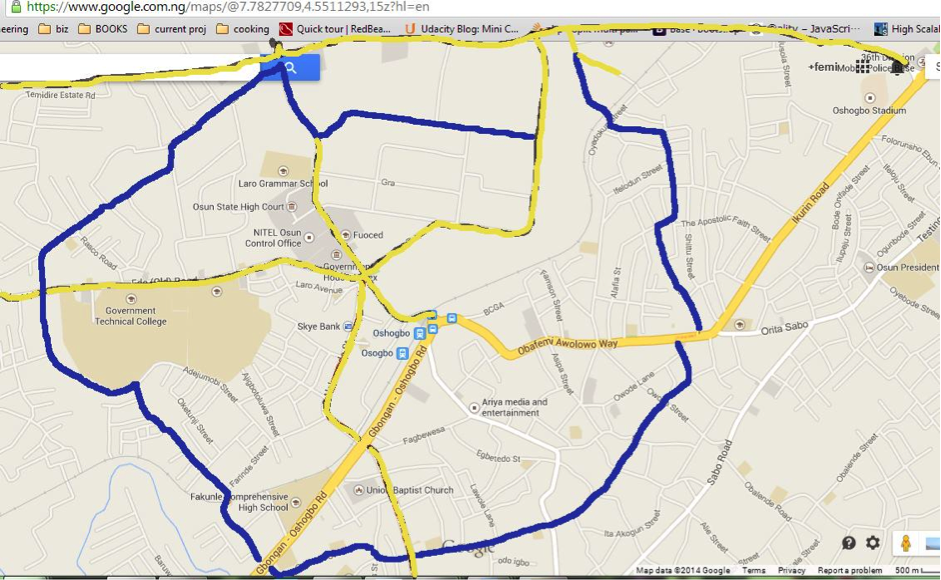 Osogbo, the capital of the State of Osun consists of network of road within the City interconnecting Federal, State and Local Government Roads. Strategically focusing on developing the state capital and providing smooth transportation of human and goods within and around Osogbo, the government of Ogbeni Rauf Aregbesola commenced rehabilitation and construction of selected 21 roads with a total length of 26.31km.
The selected roads under the first phase constructed and rehabilitated in the last 3 ½ years targets constructing roads with a life span of between 15-20 years. It features drainage construction fortified with iron and concrete thickness of between 60mm-70mm, a departure from using blocks which cannot stand the test of time. The drainages have been constructed to ensure smooth flow of water and also help in controlling erosion activities from washing away the layers of the roads. Aside from fortified concrete drainages, the roads have various layers such as laterite, stonebase and asphaltic overlay of 50mm.  The asphaltic thicknesses of the roads are the same all since it is plied by all grades of vehicles.
A unique feature of Ogbeni Aregbesola’s road construction efforts is compliance with the state capital road master plan. The master plan consists of several roads connecting the inner Ring Road and the Outer Ring Road. No administration before now had paid special attention to radically connecting these roads together. The Osogbo Inner Ring Road as constructed by this administration takes off from Off Osogbo-Gbongan Road and routes from Gbodofon-Jaleyemi-Gbemu Junction Road-Isale Aro (1.79km). It leaps over the Oja-Oba Road to connect Gbemu Junction-Oluode Market-Elelede Junction-Abaku Road-Boorepo (1.47km) bursting out and connecting the on-going dualisation of Osogbo-Ikirun-Ila Odo-Kwara State Boundary Road.
The other stretch leaps over the Osogbo-Ikirun-Ila Odo Kwara State Boundary Road and picks off from Church Street-Bisi Bankole/Anaye Market Street-Alaafia Street-Oke Onitea Road-Anaye Market Junction-Oke Onitea Road (2.08km) to connect the existing West By Pass. This forms a semi circle inside Osogbo.
The next stretch is from GRA Road-Adesina Crescent-Ilobu Road (1.35km) and connecting the Osogbo-Ilobu Road. It picks off from Off Osogbo-Ilobu Road from Lameco Junction and routes Oroki Lane( dualised and connects West By Pass at Jerry Paul Filling Station)- Tinumola/ Wonderful Road( opposite Capital Hotel (2.06km). It intersects the Iwo Road/Oke fia Road and takes off from Capital Hotel-Alekunwodo-Coca Cola(2.33km) and burst out on the Osogbo-Gbongan Road to complete the Inner Ring Road formation in the Osogbo Road Master Plan.
Other road constructed/ rehabilitated which interconnects other roads includes Station Road-Fagbewesa-Odi OlowoJunction-Ebenezer Hotel (0.61km). Oja Oba-Osun Groove Gate with Road extension (1.02km), Balogun Biiro/Oke Baale Road( 0.85km), John Mackay-Gbeja Road-Oke Baale with Constain (0.96), Kola Balogun Road Junction-Fiwasaye Olohunosebi Rd( 0.87km). One important stretch of constructed road is the Heritage Hotel Road-Dupe Aina-Odetoyinbo Rd(3.28km) which connects the on going dualisation of the 18km East-West By Pass Road at the Fountain University End. The second axis which connects the East-West Bye Pass (Outer Ring Road) is the Osunbukola/Mercy Land-Ajani Street-Prime Petrol Station (0.98km) to connect the Ofatedo- Ido Osun Road and connect it at the Ebunoluwa School Area
A careful study of the constructed and rehabilitated roads will reveal an interconnectedness of these roads with one another showing a deliberate, conscious, strategic and skilful road infrastructure upgrade of the State Capital. As stated earlier, the roads with asphaltic thickness of 50mm will no doubt last between 15-20 years thus giving the state value for money.

The Task Of Developing Osun Is Not For The Lilly-livered, MediocreApril 28, 2014
‘N3.7bn Township Roads 'Ill boost Socio-Economic Growth’April 28, 2014