Towards A Peaceful Governorship Election In Osun…

Judging by antecedents, elections in Nigeria are often fraught with intrigues and suspicions among stakeholders, which sometimes result in the disruption of peace if the issues involved are not properly defined and addressed.
Political pundits, therefore, note that adequate security should be provided in the lead-up to elections so as to ensure the security of life and property as well as the credibility of the elections. They underscore the need for all stakeholders to appreciate the need for peace and harmony in all political arrangements, while making peace the watchword in any elections.
This expectation comes to mind as the Independent National Electoral Commission (INEC) released the timetable for the governorship election in Osun State as all the stakeholders, particularly members of political parties, ought to be reminded of their obligation to promote peace. According to INEC’s timetable, the governorship election will hold on August 9, while the citizens of the state will join the rest of Nigerians for the presidential and National Assembly elections on February 14, 2015.
Observers note that in the lead-up to elections, political activists often engage in different manoeuvres to shore up the popularity of their parties and their ideologies so as to garner the goodwill of the electorate. They, however, observe that the major political parties in the state have been trading blames over reported cases of alleged misconduct before and during the voter registration, which was conducted in the state between March 12 and March 17.
Observers also cite cases of violence in some parts of the state, pointing at the killing of an octogenarian and a Peoples Democratic Party (PDP) chieftain in Ile-Ife, Pa Taiwo Ogundele, during the voter registration. Although the state Commissioner of Police, Mr Ibrahim Maishanu, debunked speculations that Ogundele’s killing was politically motivated, observers insist that the killing at the time of registration elicits a lot of concern. The PDP governorship candidate in the state, Senator Iyiola Omisore, who visited the deceased’s house to condole with his family, blamed the incident on a rival party and called on security agents to fish out the masterminds.
Nevertheless, analysts believe that political issues such as the alleged political assassination, if left unresolved, could breed violence which may mar the political process. Therefore, the INEC Chairman, Professor Attahiru Jega, was at a stakeholders’ forum in Osogbo on February 13 to sensitise political parties’ leaders, members and supporters to the need to promote peace before, during and after the election. Jega particularly urged politicians to abide by the electoral law and refer all complaints to the appropriate quarters for adjudication, instead of taking the law into their own hands.
However, INEC’s Resident Electoral Commissioner in the state, Ambassador Rufus Akeju, allayed the fears of concerned citizens over the coming election. He assured them that the commission would be firm, fair and forthright, while ensuring the credibility of the election.
Speaking on the security situation, Assistant Inspector General, Zone 11, Mr David Omojola, stressed that the security agents were aware of the trends in the political activities in the state. Omojola, who assured residents of the state that the governorship election would be peaceful and hitch-free, expressed the preparedness of the police for all elections. He reiterated that the police would take pragmatic measures to ensure peaceful, fair and credible elections in the country.
Going from the general to the specifics, the state police command warned politicians in the state against any plan to foment trouble, adding that their activities should always be guided by the provisions of the Electoral Act. Maishanu vowed that no stone would be left unturned in efforts to ensure security of the people’s lives and property before, during and after the governorship election.
These assurances notwithstanding, politicians underscore the need for all the security agencies to have solid, pragmatic plans and preparations for the election, even as political campaigns begin on May 11 across the state. They, nonetheless, welcome the recent resolve of the PDP and the All Progressives Congress (APC) – the two major political parties in the state – to eschew violence during and after the elections as a good development.
Spokespersons for PDP and APC, Mr Diran Odeyemi and Mr Kunle Oyatomi, respectively, said that the parties had agreed to sensitise their members and supporters to the importance of exhibiting good conduct during elections. Odeyemi, the Director of Media and Strategy of PDP, said that apart from this, all stakeholders in the political process ought to make peace their watchword during the election. He emphasised that peace was by all means an indispensable element in the evolution of quality leadership and sustainable democratic governance. Besides, Oyatomi, APC’s Director of Publicity, Research and Strategy, gave the assurance that the state governor, Rauf Aregbesola, would always promote the rule of law. He also urged political parties to make peace their watchword, while ensuring that their supporters exhibited a zero tolerance for trouble.
All the same, analysts insist that the people’s primary concern was how to have a free, fair and credible election in the state. They insist the success of the election will be a litmus test for the general election coming up across the country in 2015.
TRIBUNE
203 Views
10 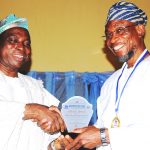