Osun Governorship Election Will Be Better Than Ekiti’s – Jega

Following the success recorded by the Independent National Electoral Commission (INEC) in conducting a credible election in Ekiti State, INEC has promised that next August’s governorship election in Osun State would be better.
INEC chairman, Professor Attahiru Jega made the promise yesterday while speaking at the commission’s quarterly meeting with the 26 registered political parties in Abuja.
He said he was satisfied with the cooperation of the political parties in ensuring a hitch-free election in Ekiti while expressing desire to have more of same in the 2015 general elections.
Jega said that in spite of the successful conduct of the Ekiti polls and the accolades that followed as the best the commission has conducted so far, he was determined to ensure that the August 17 Osun polls and 2015 general elections would be much better.
Jega also said the Commission would along with the Parties look into the challenges faced in the distribution of Permanent Voters Cards (PVC) as well as conduct of the Phase one of Continuous Voters Registration and preparations for phase two.
He said, “The meeting would also discuss the approved guidelines for political party registration and de-registration, harmonize the draft guidelines for political party campaigns ahead of the 2015 elections and schedule party primaries for the 2015 polls.”
“This meeting is coming at an auspicious time, in the wake of the recently concluded governorship election in Ekiti state. I must therefore use this opportunity to congratulate and commend all stakeholders whose positive involvement in the process has resulted in the successful conduct of the election, such that it has been adjudged as the best election INEC has so far conducted.
“From the INEC staff, to the young men and women of the NYSC and other tertiary institutions, to the security agencies, political parties, civil society organizations and the candidates and host of other stakeholders, every one put together their best and our collective best turned out to be good enough in Ekiti. That is how it should be and it is a very good lesson for our future elections.”
“The forth-coming election in Osun state, God willing should be better, and the 2015 general elections must be the best. It is therefore a challenge for all of us to join hands and continue to work together to ensure this necessary outcome,” he added.

OPINION: Why Aregbesola Deserves Four More YearsJune 25, 2014
THROUGH THE YEARS: Aregbesola's Bond With The People Of The State Of OsunJune 25, 2014 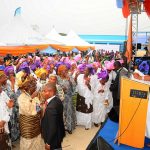