Aregbesola’s Intervention in Education Second to None – WAEC

The West African Examinations Council, WAEC on Friday commended the government of Osun for boosting education system through the introduction of innovative technological device.


The examination body rated Governor Rauf Aregbesola’s interventions in education as “second to none” in Nigeria especially in the provision of massive infrastructure.
A statement by the Bureau of Communication and Strategy, Office of the Governor signed by Director, Mr. Semiu Okanlawon, quoted the Head of the Nigeria National Office of the council, Mr. Olutise Isaac Adenipekun, as stating these when he led the delegation of the national management of WAEC to the Governor in Osogbo.
He applauded him for ameliorating education with innovative technologies.
Adenipekun said, “The ongoing revolution in the infrastructural re-engineering of the school complexes in the state of Osun has also caught the attention of all stakeholders in the education sector in Nigeria and beyond.
“The immense contribution of the state government in the development of infrastructural facilities in schools, in particular, the “Mega Schools Project” is remarkable. It is in fact second to none in Nigeria”, he stressed.
WAEC said Osun has helped to mitigate common difficulties usually encountered by the students while writing Senior Secondary School Certificate Examinations, SSSCE.
Adenipekun said Osun has contributed significantly towards enhancing Information and Communication Technology, ICT required in education sector which according to him remains the prerequisite to development of quality education in the country.
Adenipekun, who recommended the Tablet of Knowledge to other states of the federation said the initiative had contributed towards educational development.
He described the innovation as a tool of educational revolution, breakthrough aimed at enhancing and encouraging the process of teaching and learning through the use of innovative technology.
According to him, there is no doubt that the state government had recorded huge transformation in eradication of the rots in education sector through the introduction of the device.
“We are here in recognition of the state’s contributions to technological innovation and development to the education sector in the state of Osun since inception of the present government.
“We are particularly proud of the landmark achievement and the major breakthrough of the current administration in Osun most significantly in education sector by the introduction of the ground breaking ‘Tablet of Knowledge’ also known as “Opon Imo” to students of the state at secondary level.
“As we commend the efforts of Mr. Governor on the landmark achievement and major breakthrough of his administration in education most importantly on the widely applauded ‘Tablet of Knowledge’ which had improved and encouraged teaching and learning, we equally recommend other states to key into this initiative so as to improve the education sector,” he added.
He said the policies of the state had been structured not only to revamp education but to make the state the pacesetter in good governance.
Adenipekun expressed gratitude to the state for its cooperation and support to the West African Examinations Council in Nigeria, which according to him had assisted the organisation on the smooth running of the Council’s office in the state.
“We must express our deep appreciation to the government and good people of the state of Osun for their continuous cooperation and support to the West African Examinations Council in Nigeria, that has enhanced the smooth running of the Council’s office in the state.
“We also appreciate the cordial relationship that has existed between the state of Osun and our flagship organisation as we express our gratitude to the government and good people of the state for the enormous contributions they have made to the progress of WAEC and the development of sound education by positively inspiring in diverse ways the teeming youths of the country.
“The enormous support of the State Government has enabled us to provide quality service to the people in diverse ways,” Adenipekun stated.
He said the Council is willing to partner with other state governments to ensure that it eradicates examinations malpractices which he described as a menace to the education sector.
“We are committed to improving our service delivery to stakeholders and we will continually ensure smooth conduct of our examination (WAEC) in the state of Osun.
“As part of our determined effort to impact positively on the quality of youth development and education in general, the Council is ready to collaborate with states Ministries of Education to create further avenues for experience sharing with teachers in the secondary schools in areas of standardised testing and candidates/students assessments,” he added
Adenipekun however noted that the Council was ready to partner with the government in the area of e-testing and e-assessment as part of efforts to further recognise the state’s giant steps in introducing ICT to teaching and learning at the pre-tertiary levels.
“We must re-emphasise our commitment to the development of education in Nigeria and we appreciate your support to the Council in fulfilling its mandate as an examining body”, he added.
Governor Aregbesola who described “the Tablet of Knowledge” as a panacea to education revolution, said the state had recorded national and international awards on the initiative.
He said the state would continue to do the needful in supporting education sector which he described as “bedrock of development”.
Commending WAEC for maintaining education standards in the country, Governor Aregbesola said the examination body had contributed tremendously in raising the standards of education in the West African sub-region.
He reassured the people of the state of his administration’s resolve to turn around the fortune of the sector even in the face of the current economic hardship.
Aregbesola said the state was ready to collaborate with WAEC and other relevant examination bodies to improve on the standard and quality of education sector in the state.
“We are quite happy with the steady and certain growth that our intervention in education had recorded just as your visit would also encourage us on how to double our efforts and collaborate with your organisation to boost education sector in the state.
“We are ready to partner with your organisation in raising the quality of our teachers towards the preparation for pre-tertiary examinations”, he added 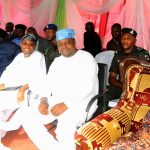