In an attempt to revolutionise the development at the rural areas, the Agency for Community and Social Development Project (CSDP) was set up in some states of the federation. The State of Osun is one of the 27 states in Nigeria that currently participate in the World Bank assisted Community and Social Development Project. The Osun CSDP was set up in 2009 during the administration of Governor Olagunsoye Oyinlola.

The administration of Ogbeni Rauf Aregbesola has since inception upped the ante of support for the CSDP, by paying the counterpart fund of the state as and when due, with a view to ensuring development at the rural areas in line with the six-point integral action plan of the administration. Even in the midst of lean resources, records have shown that the government never reneged on payment.
The project which has the backing of the Federal government is established to assist development in the rural areas as it affects infrastructure like provision of transformer to aid the supply of electricity, road rehabilitation to ease movement of people and goods, provision of potable water and the construction of civic centres among others.
The beauty of the project is that projects that would be executed in any community are undertaken by the people who voluntarily and willingly choose among their pressing needs the one they need most. Whatever project the community overwhelmingly chooses would be the one, they will ask the CSDP to fund. They choose from at least three needs.
The idea behind the CSDP is community participation, as such community which desires the project will pay 10 per cent counterpart fund, while the state government through the CSDP pays the remaining 90 per cent for the cost of the project. The revenue from the government is subsequently sourced from the World Bank and is paid in stages within a certain period of time.
According to an official of the community, the various stages to be followed, include a formal application by a community in which officials from the CSDP would subsequently visit the community to assess whether the demand is real and just or a strategy by some few people to dupe the government and the community.
If the agency is satisfied, the community would have to forward them another letter inviting them for the Participatory Rural Appraisal (PRA) where majority of the residents are expected to be in attendance. At the PRA, election is conducted to choose members of the Community Project Monitoring Committee (CPMC) made up of eight people headed by a Chairman.
It is the apex body, under which there are three other sub-committees – the Procurement, Operation and Maintenance, and the Monitoring and Evaluation.
The CPMC is the body that ensures that the aim of the community is achieved by ensuring that money released is appropriately used for the purpose it is meant. The procurement committee is responsible for the purchase of any material or equipment needed to accomplish the task. The committee responsible for the operation and maintenance of the project is the Operation and Maintenance sub-committee, while the Monitoring and Evaluation committee is to ensure that the project is constantly being monitored and evaluated.
After all these committees might have been put its place, the Field Appraisal takes place where officials of the agency and other professionals from the relevant State ministries visit the community to appraise steps taken.
If satisfied with the steps taken so far, a one-day seminar is conducted where different officials of the agency sensitise and educate community leaders on how best to go about the project. The seminar which takes a whole day is a prelude to the presentation of cheque to the community.
At the seminar, the leaders of the community are warned against the abandonment of the chosen project, as the fund that would be made available would be enough to carry out the project. This is so because the agency would have done its research to ascertain the value of the project before directing the community to embark on it.
Elementary book-keeping and accounts are taught at the seminar which comes in handy to help streamline the spending habit of the community on the project. Women are encouraged to actively participate in the activities of the CSDP while in most cases they are elected treasurers.
Community leaders are encouraged to meet regularly to ensure that decisions are based on consensus and not at the whim and caprices of the chairman. They are however, warned that if they run foul of the regulations of the agency, the law will take its due course.
The total amount to be given is usually divided into three tranches. The first tranche is presented in the community usually by the General Manager, Mrs. Funmi Abokede. The subsequent tranches are released based on the judicious use of the first one and this takes place in their corporate head office at old Governor’s office, Osogbo.
Communities that benefit from such developmental projects are advised to make good use of it, because not every community that applies scale through. The inherent benefit is that such communities that benefit can also enjoy the bounty if the first money is properly utilized.
The local government council area which covers the community is involved because there are certain documents that have to be approved by it.
An account specially opened by the community is also demanded to which the agency’s cheque is paid. The account warehouses the community’s 10 per cent counterpart funding. Cash are not withdrawn anyhow except for purposes specifically meant for.
Commending the Abokede-led agency, the Chairman, Oloruntobi Community Ota-Efun Area, Osogbo, Murtala Agboola, while receiving a cheque of N5 million from the agency for the procurement of transformer last week said the agency has been very active in transforming the rural areas in Osun with the assistance of the state government.
He urged that the tempo should be sustained for more communities across the state to feel the impact of the government. 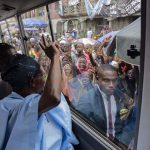