Osun State Deputy Governor Mrs. Titi Laoye-Tomori has urged parents to ensure that their children are not used as thugs in next year’s governorship election.
She spoke at the Freedom Park in Osogbo, the state capital, at a campaign rally for Governor Rauf Aregbesola’s re-election.
The rally was organised by the Osun Barbers/Hairdressers and Cosmetologists’ Association (OBAHCA) in collaboration with the De Raufs group.
Condemning thuggery in politics, Mrs. Laoye-Tomori urged members of the association to always conduct themselves peacefully and reiterated the administration’s commitment to creating jobs.
She urged youths to take full advantage of employment opportunities created by the government in agriculture, culture and tourism.
The deputy governor said: “I urge our people to shine their eyes well during the forthcoming governorship election and vote for Aregbesola. Before this administration came on board, the state was not peaceful and people were living in a brutish. Now, the state is peaceful and residents can sleep with their two eyes closed.
“I encourage you to form cooperative societies, so that you can access government’s loans. I pray that your association will prosper and you will all experience progress individually.”
De Raufs Director-General Worldwide Comrade Amitolu Shittu said the group would continue to support the Aregbesola administration’s policies.
The State President, Mrs. Funmilayo Taiwo, said the group, with its over 5,000 members across the 31 local government areas, would canvass and vote for Aregbesola.
THE NATION 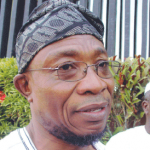