The military has been urged to stay committed to the maintenance of peaceful and united Nigeria.
The call came in Osogbo Thursday, when Governor Rauf Aregbesola addressed ex-service men of the Nigerian Armed Forces on the occasion of the 2014 Remembrance Day.
Governor Aregbesila said it is in the interests of the military and civilians alike that Nigeria is not plunged into civil war.
Aregbesola commended efforts of the exservice men in ensuring that Nigeria stayed together as one.
The event which held in the State House witnessed multitude of ex-military men and their wives; just as widows of those who had laid their lives for the country at one expedition or the other also attended.
A major highlight of the event was the announcement of N15 million Naira for the launch of the 2014 Remebrance Emblem.
Aregbesola said the military has played huge role in keeping the nation as one, especially before, during and after the civil war.
He however urged them to desist from engaging in politics; adding that nations that had been governed at one time or the other by the military is always behind their contemporaries.
“The military is best at the baracks.
“Nations that are far behind us before military interregnum in our country are today far ahead of us”, Aregbesola said.
State chairman of the Nigerian legion, Col. Alimi Saamotu leveraged on the occasion of the event to call on Federal Government to offset outstanding 25% military pension. He described the payment as “quit overdue”.
Saamatu explained that the remembrance day is particularly set aside to express concern for and appreciation of fallen heroes in the first world war, the Nigerian civil war and other wars fought in neighbouring African countries.
The high point of the event was the decoration of dignitaries with the remembrance emblem. Air Vice Marshal C.P Udey of the Airforce Safety Institute, Ipetu Ijesa decorated Governor Aregbesola.
The deputy governor, Otunba Titi Laoye Tomori, the Deputy Speaker of the Osun Assembly Adegbeye Akintinde, Royal fathers and other dignitaries were also decorated
BIOREPORTS 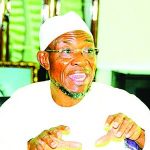 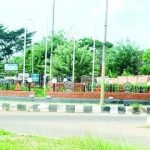