The Osun State Director of National Orientation Agency, Mr. Remi Omowon on Friday lauded the state governor, Ogbeni Rauf Aregbesola for promoting the Omoluabi ethos in the state.
This was just as the agency honoured Aregbesola as the patron of the Community Support Brigade of the agency in the state. Omowon gave the commendation when he led the state executives of the agency to pay a courtesy visit to the governor in his office at the state secretariat, Abere, Osogbo.
He said the agency has carefully studied the rationale behind the governor’s campaign for the Omoluabi values to be imbibed by the citizens of the state and have discovered that it is in line with the objectives of the NOA, which is about bringing out decent and law abiding individuals.
According to him, “we have carefully studied your administration’s campaign on the need for citizens to be virtuous, it has carefully been noted that the Omoluabi campaign is rubbing off on the people.
“We at NOA, having seen what this administration is doing in the area of making life meaningful for its people through projects that are touching on people, pledge that we will do our best to support government in creating a better society,” the NOA boss stressed.
Responding, Governor Aregbesola stressed that the job of NOA, if given the required attention by the Federal Government, is capable of rescuing the country from crisis. The governor commended the agency for being non-partisan in the discharge of its duties, noting that the agency will be meaningless if it cannot maintain peace before, during and after elections.
Aregbesola said: “There will be zero-tolerance for anybody or group that is planning anything which can compromise the peace of the state in the coming elections.”
SUNNEWSONLINE
96 Views
1 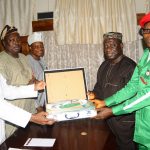