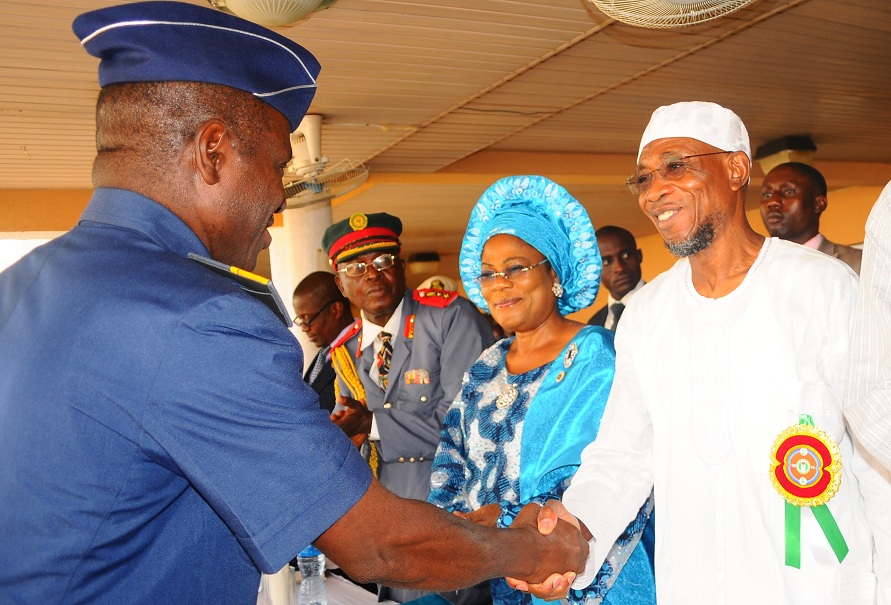 The governor,  State of Osun, Mr Rauf Aregbesola, on Thursday, said the Armed Forces in Nigeria are critical to preserving the nation’s national integrity and preventing its internal collapse, saying that all Nigerians should remain committed to the cause of a united and peaceful country.
He made this known while delivering an address at the launch of the 2014 Armed Forces Remembrance Day emblem held at the State House, Osogbo.
Aregbesola, who observed that Nigerian soldiers have given a good account of themselves as men and women on which the rest of society can rely for the special service of defending them against external armed aggression and hostilities, also announced a donation of N15 million to launch the 2014 Armed Forces Remembrance Day emblem.
He submitted that soldiers, in the course of their duties, have availed themselves well in the uneasy task of bearing arms in defence of their people.
According to Aregbesola, “we will not easily forget the important role played by members of the Armed Forces in the nationalist efforts that eventually led to the country’s independence.
“Soldering as a profession is a difficult calling. Even if only for the fact that it involves the voluntary sacrifice of one’s life for one’s nation. In this regard, our soldiers have acquitted themselves well.
“They are described as patriots who have severally done the nation proud. They have continually been called upon to make sacrifices on behalf of their country and for the greater cause of humanity.”
The governor further stressed that “this day must therefore serve as a reminder to us, as civilians, that we also have our own complementary role to play in preserving the peace and ensuring the progress of our country.”
Speaking earlier, the Deputy Commandant-General and Chairman, Nigerian Legion, Osun State, Col. Alimi Samotu, said people must, as matter of responsibility, remember the dependant and children of the fallen heroes.
He called on the Federal Government to pay the outstanding arrears of military pension, saying, “this should be taken seriously as we, the state chairmen, are faced with much pressure from our members. In order to put us in a safe situation, the balance of 20 per cent arrears are much awaited to avoid possible demonstration in future.”
TRIBUNE