Governor Rauf Aregbesola of Osun State has sought for the approval of the State House of Assembly to access N1.5 billion housing development loan offered by the Federal Mortgage Bank of Nigeria, FMBN.
This is contained in a letter written by the governor to the assembly, which was read at the plenary, in Osogbo, on Thursday, by the Speaker of the House, Mr. Najeem Salaam.
In the letter, the governor said if the loan was approved, it would be used to build 342 housing units by the State Property Development Corporation, OSPDC.
He said the houses would be sold to the contributors to the National Housing Fund, NHF, in the state public service.
The Governor said his administration had deemed it worthwhile to accept the loan offer because of its benefits.
VANGUARD 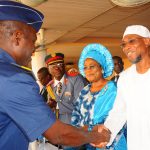