DAY 3: Osun Residents Call For Increase In Registration Machines Allocated To Each Local Government In The State

As the continuous voters’ registration enters day three on Friday March 14, the residents of the State of Osun has called on the Independent National Electoral Commission (INEC), to increase the number of registration machines allocated to each local governments in the State.

Majority of the poling unit visited on Friday by our correspondence indicated that the prospective electorates were not contented with the way the exercise has been handling by the INEC officials since the commencement of the exercise on Wednesday.
In Ila-Orangun, Ilesa, Ede, Osogbo, Modakeke, Ile-Ife, Ikirun, Okuku and Iwo hundreds of people were seen defied the hot sun to register their name, but unfortunately many of them returned home disappointed because a single machine stationed at each ward could not serve the multitude who trooped to the centre.
Speaking with Bioreports at ward 10 in Ilesa East Local government, some of the people including Mr Wale Olaiya and Mrs Ajoke Olaoye lamented that it was unfortunate that only one registration machine was given to a ward.
Mrs Olaoye said considering number of people that would register in each ward, INEC should provide enough machines to allow potential registrants opportunity to register.
Echoing a similar view, Mr Ibrahim Olayiwola and Mrs Bunmi Ategbero who were on the queue for the same mission at the Salvation Army Middle School, Osogbo lamented that they were highly disappointed by the “I don’t care attitude” of the INEC officials, saying that the INEC has not yet proved to the whole world that they are capable of conducting a free and fair election.
According to Ibrahim, how would INEC provide one machine per Ward which contains many units and giving that short period of time for such exercise to take place, saying they were not happy with INEC for bringing insufficient machine to the area?
They said hundreds of poling units was collapsed into one ward with only one machine serving all these units in the area, adding that it has made it difficult for them to attend to a good number of people, just as they said they have to boycott their works for the registration since it started.
While narrating his ordeal, Ibrahim said INEC officials were only able to registered just 14 persons at the close of the work a day before.
He enjoined people, especially those that just attained the age of 18 to be patient with the commission and ensure that they register so as not to be disenfranchised during election.
Bioreports learnt that the exercise will be rounded off on Monday March 17.
BIOREPORTS 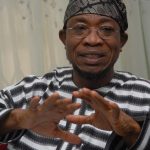