Osun Assures On Even Distribution Of Projects 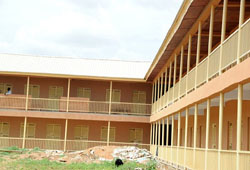 Osun State government has restated its commitment towards making the best living condition available to people of the state irrespective of their social or economic status.
Osun State deputy governor, Mrs. Grace Titilayo Laoye-Tomori, stated this while addressing participants at the flag-off of a five-day reorientation workshop organized for different categories of politicians in the state.
The workshop with the theme: Colloquium Phase One: Issues in Political Engagement, powered by The Knowledge Plaza, held at the Centre for Black Culture and International Understanding, Osogbo.
She acknowledged God’s love and mercies as the major reason for the sustenance of peaceful atmosphere that is currently being enjoyed by the people of the state since the commencement of the present administration.
She recalled the deplorable state of the state’s infrastructure coupled with the spate of economy disintegration before the birth of the Aregbesola led administration in November 2010.
Mrs. Laoye-Tomori who condemned the high rate of youth unemployment in the country, said the only means of providing lasting solution to the persistent civil unrest in the country is giving gainfuly employment to the teeming youths.
She said the government of Mr. Rauf Aregbesola has performed creditably in this regard by placing high priority on youth employment in the scheme of his government through various programmes like the OYES, O-REAP, O-BEEF and other sectors of the state, adding that the federal government and other state governments across the nation should be committed to youths’ employment in their programmes saying Nigeria is blessed with an avalanche of energetic, vibrant and knowledgeable youths that could turn around the fortune of the country if given opportunity to express themselves.
Mrs. Laoye-Tomori also used the opportunity to appeal to members of the ruling All Progressives Congress in the state and lovers of the party and administration of Governor Aregbesola to come out en masse to re-elect the party in the forthcoming August 9 gubernatorial election in the state so as to allow Mr. Aregbesola to complete all the ongoing people-oriented programmes.
Alluding to the good that lies ahead for Osun State in particular and Nigeria as a whole if APC is elected in all the coming elections across the country, APC acting Chairman in the state, Elder Adebiyi Adelowo, enjoined party faithfuls not to renege on their loyalty to the party.
He said APC as a party will not disappoint them but will make good its promises to them and continue with the provision of basic social amenities across the length and breadth of the state with a view to making life conducive to the good people of the State.
Participants at the programme were drawn from all the political parties that formed APC across every part of the State.
DAILY INDEPENDENT