News
Home News Osun: When The Language Of Development Is Empowerment
News

Osun: When The Language Of Development Is Empowerment 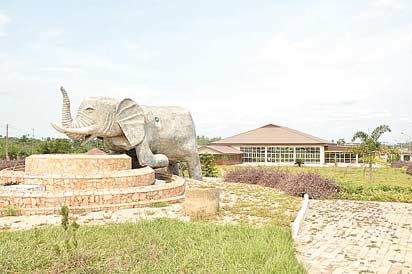 IMAGINE! Omisore flagged off his campaign here (Freedom Park) and he had the nerve to say Aregbesola hasn’t completed any project. If this place was not completed, how did it become available to him to have a campaign rally? Any way, we’ll soon change the name from Freedom Park to Nelson Mandela park”.Why Mandela, asked one of his listeners. South Africans wouldn’t name a facility after Awolowo, for example.
“Well, that’s their business. We’re pan-Africans,” was the curt response. Hmmm, Pan-Africanism. Of what benefit has it been to the average Nigerian, this reporter wondered as the tour bus navigated a narrow path avoiding a jam in this busy Osogbo traffic.
Number of Projects
Ahead was the just completed Salvation Army High School but it was not novel to this reporter because it was a high point during the last visit.
But what struck a chord this time around is the number of projects the state government is embarking on now. To say Osun is a massive construction site or work in progress is but stating the obvious.

From road infrastructure to educational facilities and infrastructure, agriculture and tourism; even sports is not left out of the picture as the state’s stadium is also under reconstruction. No doubt, Osun is one state in a great ‘catch-up’ game. What changed this development equation? Why the hurry? some might ask. The answer is in the Renaissance Capital.