The government of the state of Osun has promised the relations of all victims of the April 14, 2007 Governorship/ House of Assembly Election in the state of Osun that they will not die in vain.
It said that everything possible will be done to immortalize them as heroes and martyrs of democracy.
The state Commissioner of Information and Strategy, Sunday Akere, gave the assurance while speaking with newsmen on the occasion of the eighth anniversary of the bloodiest election in the history of the state.
Akere said that the memory of the harmless young men that were killed at various polling units across the state while defending their ballot boxes from being forcefully hijacked and taken away will not rest until free, fair, credible and transparent election is entrenched as the order of the day not only in Osun but all over Nigeria.
It would be recalled that about 12 people lost their lives in Ikirun, Igbajo, Ila Orangun, Ile-Ife, Ilesa and some other parts of the state on April 14, 2007 while trying to stop thugs of a political party from carting away their ballot boxes in their desperate bid to prevent the emergence of the governor, Ogbeni Rauf Aregbesola, at the election.
Besides, Akere said financial support, employment opportunity and educational scholarship had been provided to the families of these fallen heroes while no effort will be spared to ensure that they are immortalized and their names written in gold.
He also used the opportunity to admonish the people of the state to be wary of these desperate politicians who are lurking around the corner again to deceive the people with money and materials to keep them in perpetual penury and underdevelopment.
He said the administration of Ogbeni Rauf Aregbesola will continue in its strive to make life better for the people as it is presently doing while also continuously building on the existing peace and tranquility prevailing in the state.
He warned those promising to turn the hand of the clock back to the era of violence and instability to steer clear of Osun as nothing will be spared to defend the life and properties of all its citizens.
To those that suffered one measure of incarceration, harm and dislocation of economic activities, he promised that adequate compensation will be given to them as a committee is working on the financial details of the white paper on the Justice Uwaifo Truth and Reconciliation Commission as accepted by the state executive council.
He said “By the grace of God, the August 9, 2014 gubernatorial election in Osun will be more peaceful and rancor-free than the April 2011 elections as the principle of one man one vote will hold.”
DAILY INDEPENDENT 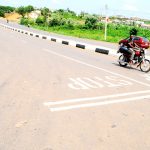