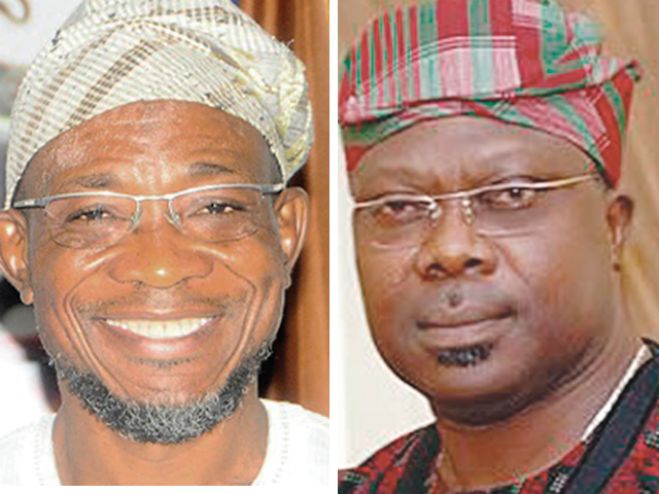 Knocks and commendation have continued to trail the last governorship election in the State of Osun, as participants in the electoral process and political analysts have not stopped reviewing the election three months after.

A chieftain of the All Progressives Congress (APC), Mr Adelani Baderinwa, on Tuesday, described Governor Rauf Aregbesola’s victory in the election as ‘well-deserved with God’s favour, but shocking and unfortunate for the Peoples Democratic Party (PDP) and the Presidency.

Baderinwa spoke while picking his intention form of the APC to contest the 2015 Federal House of Representatives election for Ifelodun/Boripe/Odo-Otin Federal Constituency in the State of Osun.
The Senior Special Assistant to Aregbesola on Media and Strategy stated that the election could be best described as an unsuccessful coup plot by the PDP and Presidency, who had deployed all their machineries for the election to rig out the APC government.
He maintained that the PDP and the Presidency could not believe Aregbesola would be returned to the Government House in line with the wishes of the people, saying that the election was almost rigged in favour of the PDP governorship candidate but for God’s and human interventions.
Baderinwa then warned against rigging the 2015 general elections, stating that the Chairman of the Independent National Electoral Commission (INEC), Professor Attahiru Jega, confirmed the botched attempts to rig the Osun election against the people’s will.
He said: “As a participant in that election, I could describe it as an unsuccessful coup plot. The share number and myriads of security personnel that superintended that election made it look like there was an attempt by PDP to snatch the government of Osun from APC at whatever cost.
“The utterances and dispositions of PDP operators at all levels portends attempt at snatching power. They must have been briefed by their Ogas at the top as to the fact that voting or no voting, PDP candidate would be declared. That was the sing-song of PDP members immediately President Jonathan left on Saturday preceding the election after the last moribund rally they had in Osogbo.
“It took God’s intervention for reasons to prevail and APC to make it eventually. You will agree with me that it would have been beyond comprehension to say APC and Governor Rauf Aregbesola lost that election in view of available indices. But PDP and the Federal Government were hell-bent on snatching the APC-led government of Osun.
“God intervened. A lot of reasonable and rational Nigerians intervened on the side of reason. You will recollect that by 7.00pm on August 9, 2014, all results from the polling units had been known. Also, by 9.00pm, collations in all the council areas had been done. You can then imagine what happened between that time and 7.00am on August 10, 2014, when the winner was declared.”
Baderinwa, who stated that the PDP and its members had been rejected in the state since 2007, said the party would also lose all the elective offices in the 2015 general elections to the APC as they did in 2011
OSUN DEFENDER