Local birth attendants and medical practitioners in Osun state have promised to collaborate with officials of federal government to end female genital mutilation in the state.
This was parts of resolution at the workshop organised by United Nations Population Fund, UNFPA, in collaboration with United Nations for Children and Education Fund , UNICEEF, and Action Health Incorporated ,AHI.
Local birth attendants and medical practitioners that attended the sensitization workshop, drawn from the three senatorial districts of the state, resolved to assist government in eradicating the menace of female genital mutilation.
In a communiqué issued at the end of the workshop and signed by Mr. Adiatu Salau and Dr. Lekan Awowola, the traditional birth attendants, promised not to engage in the act of female circumcision in the state after being informed of the inherent health implications.
Speaking at the workshop, the state coordinator of Inter-African Committee on Harmful Traditional Practices affecting the health of Women and Children, Mrs. Aduke Obelawo described female genital mutilation as violation of the right of a girl child and the main cause of maternal mortality.
NEWS NIGERIA 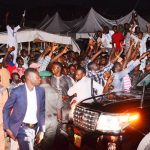