CJN To Judges: Be Stringent With Corruption Cases

Gov. Rauf Aregbesola was at the special session of the Supreme Court to mark the commencement of the 2015/2016 legal year where the Chief Justice of Nigeria, CJN, Justice Mahmud Mohammed, yesterday, tasked judges to be more stringent while presiding over corruption-related cases.
The Chief Justice said there was need for all judges to expedite the determination of corruption cases using the 2013 Practice Directions on Serious Crimes, which he said was specially enacted to address delays in the hearing and determination of such cases.
He said: “Where justice is prompt, just and based on the law, there are fewer chances for the public to ascribe corruption to our courts.”
Justice Mohammed spoke at a special session of the Supreme Court to mark the commencement of the 2015/2016 legal year and swea-ring in of 21 senior lawyers, who were recently conferred with the rank of Senior Advocates of Nigeria, SAN.
He said: “Permit me to reflect on the activity of the past one year as a necessary pathway into the policy of this court in the year to come.
“I make bold to say that the 2014-2015 legal year was unique in the history and life of our nation’s judiciary as a whole, and the Supreme Court of Nigeria in particular.
“In my considered opinion, the judiciary was largely successful in effectively responding to the challenges it faced in arduously protecting its impartiality and independence.”
Vice President Yemi Osibanjo, Governor Rauf Aregbesola of Osun State and President, Pan African Laywers Union, Mr. Elijah Banda were among dignitaries at the event.
VANGUARD 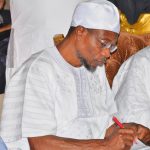