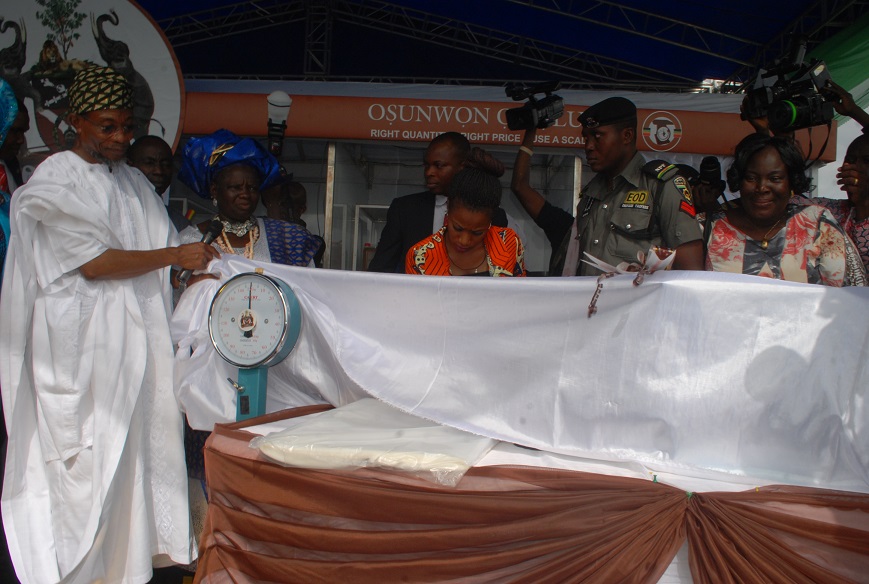 Osun State Government has  officially launch the use of standardized weighing scales called Osuwon Omoluabi for accurate transaction of businesses in all markets across the state today. One of the aides of Governor Rauf Aregbesola and the immediate past Commissioner for Commerce, Industries, Cooperatives and Empowerment, Mr. Ismail Adekunle Jayeoba Alagbada, who made this known, in a statement in Osogbo, stated that the programme was held at the Nelson Mandela Freedom Park at Old Garage in Osogbo, the state capital.

According to him: “The programme was put in place to ensure that the accurate weighing scales are introduced for usage for commercial transactions in all the markets across the state to discourage cheating of customers in the markets.” He noted that “the existing measures are based more on rule of thumbs than any degree of accuracy and consistency.
The existing measuring standard are not accurate and full of inherent shortcomings often observed by the market men and women themselves.” Alagbada further explained that, standardizing scales will eliminate all inherent shortcomings, mistrust, incessant arguments and disagreements that are currently common place in commercial transactions.
“The standardized scales and measures will positively impact on the economy of the state by bringing unprecedented ease to trade and commercial transactions in the state.” “This will no doubt increase the pace and volume of transactions among traders and consumers, thereby increasing the volume of commerce.”

Desist from acts capable of tarnishing your image —Osun VGN bossJune 14, 2016
Declare June 12 Democracy Day and not May 29 – Governor AregbesolaJune 14, 2016