News
Home News Sustaining Development In A Recession – The Case Of Osun
. .
News

Sustaining Development In A Recession – The Case Of Osun 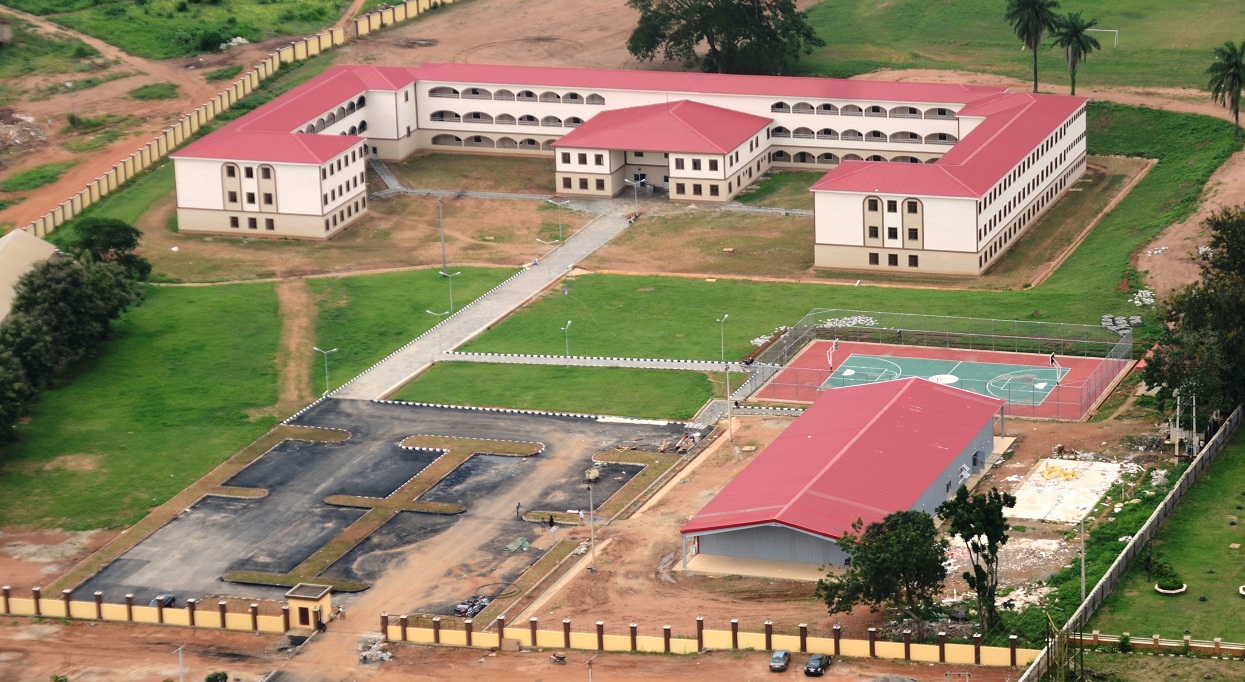 At a period when most narratives point to ‘The Recession’ as an excuse for the crippling growth/performance across various governments, the story of the State of Osun presents a refreshing perspective as to how, against all odds, concise people-centered development is possible.

While it may be easy to heap the blame of this economic downturn on the present leadership in the country, but like all sunsets, Nigeria arrived at this sorry pass, thanks to the mismanagement of our national economy by the immediate past federal administration. Lest we forget, the irredeemably corrupt administration ran Nigeria to the ground. Our national treasury was plundered by cronies, friends and lackeys of government and the ruling party functionaries. Coupled with the massive pillaging of our foreign reserve, one needs no soothsayer to predict our present economic predicament as a nation.

While on the topic of mismanaged economies, it goes without saying that critical infrastructure in Osun before the inauguration of the government of Ogbeni Rauf Aregbesola in November 27, 2010, was largely in a comatose. Economic activities had largely slowed down with considerable capital flight and migration of citizens in search of a better life.

Two options were available, (1) Continue in the traditional cosmetic governance: repaint a few state-owned buildings, patch a few roads here and there, pay salaries of civil-servants, using over 70 per cent of the state’s revenue (civil-servants represent less than one per cent of the 4.2 million Osun resident), or (2) Position Osun towards the path of sustainable economic development by making a case for concerted investments and using creative means to raise fund for critical physical and human infrastructure that will in turn spur private investments and economic growth.
A cross-section of road projects completed by the current Osun administration
Without any gainsaying, building roads, bridges, schools and hospitals among other physical infrastructure, creates jobs, enriches the local economy and gives access to market for farmers (many of whom dwell in the rural areas). If you ever wonder why more outsiders were crying than the ‘bereaved’ when the salary conundrum lasted, it was because majority of Osun people understood why the government aggressively pursued development of critical infrastructure across the state as it did. However, this came at a cost!
Why debt financing for critical infrastructure?
For such a small state in a country with high inflationary environment, high cement prices, currency exchange risks and non-existent steel industry (major components of construction), developing Osun into a 21st Century state became a major challenge, one which the Aregbesola administration tackled very well for posterity’s sake.
To wait for the time when the cost of building a school or of constructing a road to double would have been unforgiveable, not now that a dollar exchanges for N450, compared to then at N150. What option really existed before Ogbeni in 2010 other than to raise funds from the capital market at seven per cent lower than commercial bank interest rate?
Osun opted for a mix of financing options to reduce risks and meet its primary statutory commitment. She followed a responsible borrowing regime by only committing 30 per cent of its revenues to debt servicing, leaving free cash-flow for critical and mandatory expenditure, such as salaries. With this, Osun began an aggressive infrastructure roll out in 2012 before the three-headed tragedy of: (1) Blanket salary increment negotiated by the Federal Government of behalf of states in 2012; (2) 40 per cent crash in statutory allocation due to alleged theft of 400,000 barrel of oil per day in 2013; and (3) 50 per cent crash in the global price of crude oil and subsequent impact on statutory allocation. But for these, the State of Osun would have been just fine.

Other schools completed by the current Osun administration
As we speak, three super highways are under construction. These super highways consist of five bridges with each bridge at 90 per cent completion. Despite this biting recession, construction is ongoing because Osun secured an innovative promissory note purchase facility.

A cross section of road projects in Osogbo, Osun State capital.
Osun’s financial model worked perfectly by creating a pool of funds for infrastructure roll out that can only be utilized strictly for such purpose; due to market regulations of such funding by 2014. Using this financial mix, the administration of Ogbeni Rauf Aregebsola rehabilitated and completed 230 states roads spanning 368km. His administration partnered local governments to deliver 226 council roads across the 30 local governments and the development area with a combined length of 216km.
A cross section of the 300km council roads built across all Local Governments Areas in the state of Osun
Osun in partnership with the World Bank, RAMP 2 programme, also delivered 250 km of rural roads to open up farms in rural areas. The state is on course to deliver the next set of 250 km. It is noteworthy that Osun is one of just six states selected to partake in this programme. In all, the government has so far delivered road infrastructure to the tune of more than 1000 km, opening up our rural enterprises and areas, connecting urban centres and positioning the state as a trade and production hub.
Other construction projects delivered include 20 Elementary Schools and 22 Middle Schools all completed and in use. Many more are still under construction.

Brand news Armoured Personnel Carriers (APC), Hilux Trucks and Ambulances acquired by the Osun state government
Despite its limited resources, the State of Osun has continued to champion delivery of an integral human development agenda. Osun in the last six years has made unprecedented investments in security towards the greater welfare of the people. Twenty five high capacity Armoured Personnel Carriers were deployed, being the largest contribution to the Nigerian Police by a state government at the time of deployment. The state today enjoys a functional 24-hour emergency ambulance services with a fleet of 50 brand new vehicles across the 31 local government areas. This state-wide ambulance service is powered by 408 well-trained and kitted paramedics, who have attended to more than 8,000 cases since inception. This quality of service in concept and implementation is unprecedented in the annals of the state.

Osun has also invested concisely in the empowerment of micro, small and medium enterprises (MSME), given the trickle-up impact these make to socio-economic development. The government has so far deployed over N7 billion to 50,000 beneficiaries spread across 4,500 cooperatives and/or businesses targeted at market women, small scale farmers, artisans and physically-challenged individuals. Through its welfare programme for critically poor citizens, the government has supported 16,250 widows and disadvantaged persons.

Some of the 253,000 elementary school pupils enjoying their nutritious meal on a school day in the state of Osun
The government’s strategic investment in the critical basic education level has delivered training and re-training for over 21,017 teachers, giving the importance of these to the learning experience. So far, 277 model schools with 1,811 modern classrooms have been built or rehabilitated. The schools are being furnished with 26,922 sets of chair and table. Every school day in Osun, 253,000 elementary school children receive nutritious meals produced largely by local farmers, to boost health and cognitive capability at their formative stage, as well as boost local food production. The Osun School feeding programme is the longest running of its kind in the country.
In six years, Osun has through its basic education agency, invested over N8.5 billion to build capacity, both in human and physical infrastructure. This investment in education is driven by the resolve of the administration to equip the future generation of Osun with the best possible resources regardless of their background, so they can seek a better and prosperous future for themselves and consequently for the State.

How Osun continues to thrive

As many states became fiscally unstable and shortfall in federally collected revenues continued to challenge salaries payment, the government of President Muhammadu Buhari heeded Osun’s push for interventions by helping her and other states restructure commercial loans into FGN bond with reduced financial cost and freeing of cash-flow in August 2015. The FG also granted a concessionary loan to Osun and many other states to clear backlogs of salaries and to restore treasury and fiscal stability of these states.

The state government and the labour unions also agreed that whatever is available as net revenues accruing from Federation Accounts and Internally Generated Revenues (IGR) will be apportioned in such a way that will take care of critical expenditure, wages, pension, salaries and other expenditure required to run government. This milestone agreement gave birth to the apportionment of revenue, called modulated salary.

From August 2015 till now, the prudent management of concessionary loan (bailout) and its subsequent revenues by the administration of Ogbeni Rauf Aregbesola has ensured salaries are paid and workers keep their jobs, rather than embark on mass retrenchment; an alternate idea other state governments have toyed with.

The salary regime ensures full salaries are paid to junior cadre in levels 1-7, while their senior counterparts are paid nothing less than 50 per cent or greater, depending on the level of income per month.

The government’s infrastructure development efforts has already started yielding results as investments and production has been on the rise in Osun: In 2009, the famous International Breweries, Ilesa, known for Trophy brand which serves the South West and beyond, doubled its production capacity to cater for the boost in local economy. Tuns Farms, an indigenous poultry company, in partnership with small holder farmers, ramped up broiler production to position the state as the second largest broiler producer in the country. Omoluabi Garment Factory, a Public-Private-Partnership between Sam and Sara Garments and the State Government of Osun emerged as the largest Garment Factory in West Africa. An indigenous computer assembly plant, RLG Adulawo also set shop in Osun as a result of the favourable infrastructure in the State. These and more are the direct and indirect investment results of the administration’s bet for a prosperous future and these efforts are paying off.

Man of the people! Governor of the state of Osun, Ogbeni Rauf Aregbesola, is loved by the masses.
Consequently, Osun developmental programmes have also impacted on the socio-economic profile of the state as reported by reputable institutions. In 2015, The Oxford Poverty and Human Development Initiative (OPHI) rated Osun 2nd Highest in Human Development Index among the 36 states in the Country. In 2014, Renaissance Capital (RENCAP) in its 36 shades of Nigeria economic review of states ranked Osun as the 7th largest economy in Nigeria, while in 2013 the NBS rated Osun as the state with the lowest poverty rate in Nigeria.

In conclusion, was there a dearth in critical physical infrastructure in Osun before 2010? The answer is yes. Was there an urgent need to build these infrastructures? The answer is a resounding yes. Was the decision to debt finance the construction of these infrastructures a rational one amongst other options available? Yes! Has the state government properly managed the resultant downside risks involved in taking these steps? Yes! Nobody argues with results. The impact of the decisions taken by the present administration in the state continues to yield positive results from all available indices.