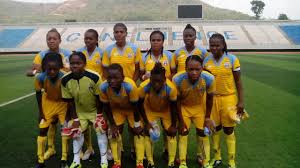 Nigeria Women Premier League side Osun Babes FC have unveiled their new club crest which will appear on the club’s shirt from the start of the 2016/2017 Nigeria Women Premier League Season (NWPL).
The management of the club decided to make it known to the public after lengthy consultations with stakeholders and fans of the club who were broadly in favour of establishing a new logo for the Omoluabi Queens.

The new design marks the departure from the existing badge, adopted in 2014, and instead resembles an updated version of the club’s new philosophies.
According to a statement by the club’s media officer, Olayinka Olawole, “The new crest features a shield that retains the seal of the State of Osun, which comprises of two elephants, Ori Olokun, a Cocoa tree, an inner shield, crossed woods, Swords, a mace and seven cowries.
“The elephants symbolizes strength, service and prosperity, while the Ori Olokun represents the common origin of Yoruba and their dexterity in technology. The Cocoa Tree and two crossed logs of wood on which the elephant stands signifies the dependence of the state and its respects for agriculture and other natural resources of the land.

“Also, the chief’s sword and mace embodies the spirit and purpose of Osun State! While the inner shield and cowries on the Ori Olokun symbolizes the link between Osun State and the federal republic of Nigeria and the seven grandsons of Oduduwa respectively. The crest also includes the year the club was founded, 1995.
Some of the players told the club’s media team how happy they are looking forward to wearing the new badge.
“We are really looking forward to wearing it. It’s something new. This is what we love about this club and the journey we have been on since we’ve been here. There have always been new and exciting things and every one of them positive. It’s no different with this badge. We think it’s great.”
Meanwhile, the club has officially ended screening for new players ahead of the 2016/2017 NWPL season and have retained eighteen players from the old players and also picked twelve new exciting players for the new season. 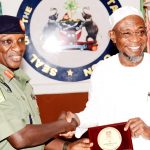