The Acting Executive Secretary, Office of Transportation, Osun State, Engr. Wahab Olayiwola Ibrahim has called on motorists to avoid over speeding and obey traffic rules and in order to support the agency’s efforts to keep residents safe.

The Acting Executive Secretary told journalist in Osogbo that, his officers will be strategically deployed to all critical areas in the state in order to ensure the free flow of traffic during and after the festive period.
He emphasised the need for every motorist to always obey the traffic light at Ola-Iya junction in Osogbo, saying this would contribute to the free flow of vehicles while they should obey all traffic rules.
While warning his men against corruption, Engr. Ibrahim enjoined all of them to see themselves as dedicated, honest, and God-fearing officers.
The Acting Executive Secretary admonished members of the public found guilty of any traffic offences to always insist on the collection of receipt as P.O.S. is attached to his officers at their different locations across the state.

According to him, “all vehicle particulars like vehicle license, road worthiness with backup hackney permit (for commercial vehicles only), insurance, prove of ownership, change of ownership, Number plate, heavy duty permit, (for trucks), driver license and commercial vehicles in any of the state colour should be up to date as the office of transportation will not tolerate any motorist without his/her valid document”. 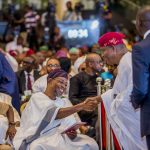