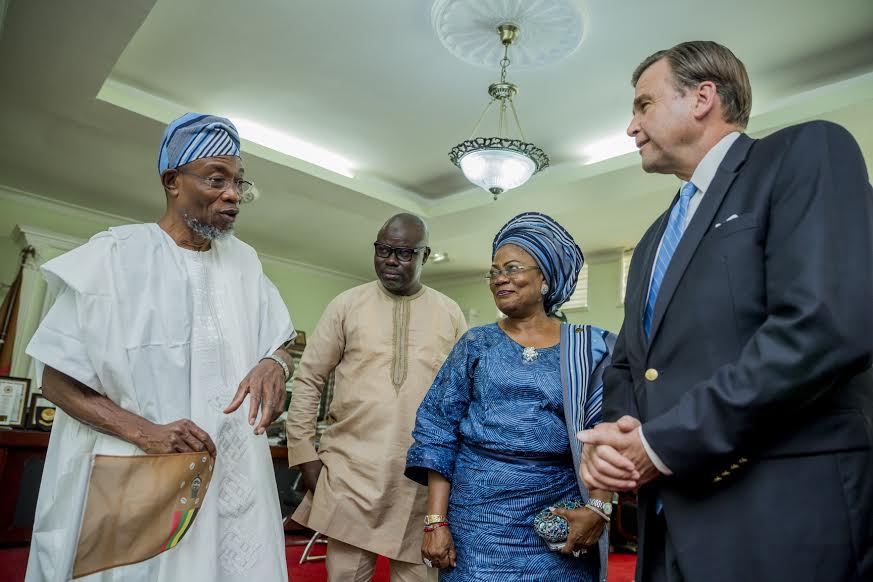 …Passes vote of confidence in Aregbesola’s administration
The United States Ambassador to Nigeria, Mr. Stuart Symington has applauded the state Government of Osun for its Social Investment Programmes, saying that is the major reason everybody is coming to Osun to learn about her programmes.

Mr. Symington declared this today when he paid a courtesy visit to governor of the State of Osun, Ogbeni Rauf Aregbesola at the Bola Ige House, Abere, Osogbo, the Osun State Capital.

The Ambassador who was accompanied on the trip by the US Consul-General, Mr. John Bray; Deputy Public Affairs Officer, Mr. Frank Sellin and Assistant Regional Security Officer, Mr. Paul Biba commended the state government for its massive infrastructural investment which he said has created wealth and employment for the people.

The Governor of Osun, Ogbeni Rauf Aregbesola had while receiving the US Ambassador with select members of his cabinet described his government’s believe in investing in human capital.

The Osun governor also made it clear to the ambassador that his administration came into government with a clear objective of how to tackle the various socio-economic problems of the people of the state.

Aregbesola maintained that his administration focused on the six-point integral action plan which has over the years made his government to focus on social security areas through schemes such as the O-YES, O-MEALS, O-AMBULANCE and the welfare scheme for the aged among others.

“From the onset, our goal for the people of the state was clear to us. As part of our efforts to take our people out of poverty, we re-energised the school feeding programme which we met on ground.

“The OMEAL programme of our state has turned subsistence farming into a commercial venture in Osun. It has boosted the sales of agricultural products in the state tremendously” Aregbesola stated.

The governor further revealed that the state has served as at the last count, over 202,234,400 hot meals to primary school pupils in the state.

The American envoy on learning that over 200 million meals have been served to school pupils in Osun, lauded the State Government for running an impactful and people-oriented government in spite of the present economic challenges facing Nigeria.
‎
Mr. Symington also commended the efforts of the state government in road infrastructure likened road development to human development.

Describing democracy as the best form of government in the world, Syminton noted that the policies adopted by the Osun state government in stimulating her economy and advancing the well-being of her citizens’ remains the major characteristics of democracy in the world.

“The state is on a steady growth, I so much appreciate good roads. This state is investing so much in roads infrastructure and it’s very good for the future and overall development of the state.

“Another good area is your various social intervention programmes, you are helping in creating jobs and wealth, no wonder people always come to your state to learn,” The American envoy noted.

Recall just last week, the UNICEF had led top government officials  drawn from 17 states in the six geo-political zones of Nigeria to Osun for a four-day learning tour of its various social investment programmes. 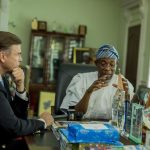 Aregbesola Cautions US Over Trump’s Decision on Climate ChangeJune 21, 2017
Osun Has Done Everything to Make Osunwon Omoluabi an Acceptable Philosophy in CommerceJune 23, 2017