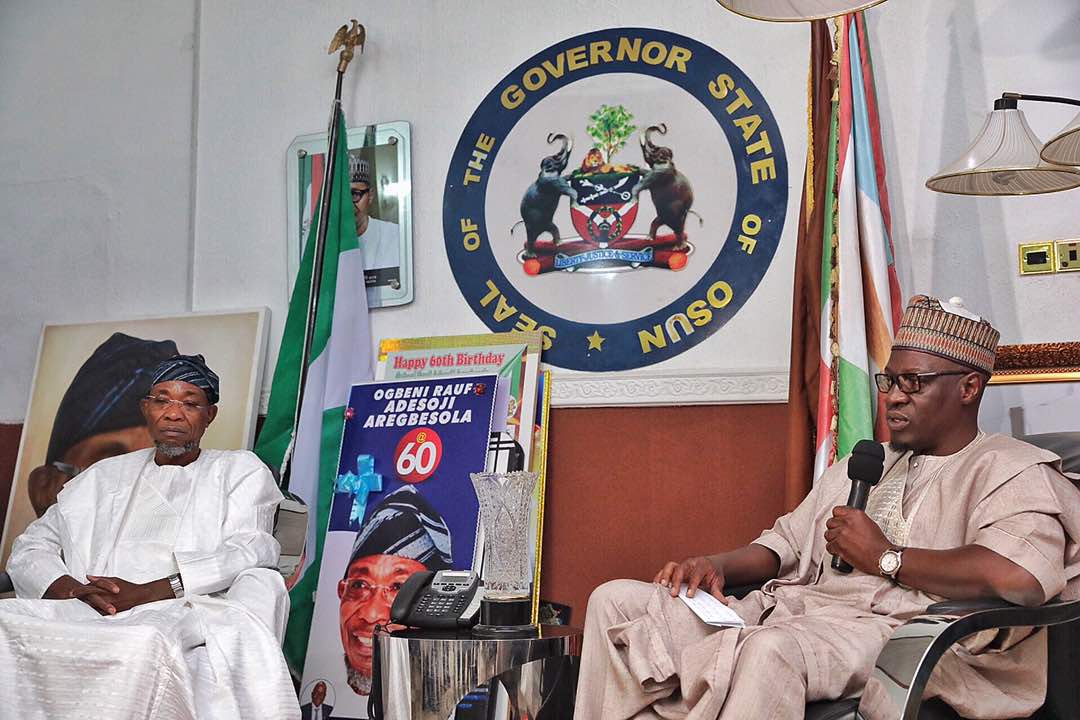 The Governor of Osun, Ogbeni Rauf Aregbesola on ‎Friday described the death of his mother as a great blow to Aregbesola dynasty and womanhood.

This was as the Kwara State Governor, AbdulFatai Ahmed described Aregbesola’s mother as a complete epitome of womanhood.

Governor Aregbesola stated this while hosting the Kwara state Governor who came to pay a condolence visit to him over the death of his mother, Alhaja Saratu Aregbesola.

Alhaja Saratu Aregbesola died at the age of 84 year on Tuesday and buried on the same day in her residence, Ilesa, Osun state.

Governor Aregbesola said the death of his mother was in no doubt caused him a deep sorrow, describing it as a ‘deep disaster’.

According to him, there is no strict definition of sorrow than a moment of great sadness which he’s personally undergoing over the demise of his mother.

“My mother would have been 85 years in the next few weeks if she had not died, but even at 90 years, I will not wish her dead.

“So it is a deep sorrow that I have to lose my mother as her death was not only shocking but painful to me personally.

“Her death has made me to know further that it is very tough to lose one’s mother, aside looking good on camera, within me, I have a feeling of great loss, but I am consoled with the voluminous condolences and expression of sympathies and love from all quarters.

“This is an attestation to the fact that my mother is very happy in her new station most especially for the expression of concerns and sympathies received across faiths and personalities from all walks of life.

“May God translate all these grieves, condolences to rewards for my mother wherever she is now and grant her soul the best place in the Aljana Fridao (paradise).

“May Allah spare the lives of those she left behind and make us live longer.

While appreciating the condolences from President Muhammadu Buhari and others, Governor Aregbesola beseeched God to reward in good for being concerned over the death of his mother.

In his condolence remarks, the Governor of Kwara State, AbdulFatai Ahmed, thanked Allah for taking late Saratu Aregbesola  at a time her demise is being celebrated globally.

He said Alhaja Saratu had lived a fulfilled life that is full of good legacies worthy of emulation, saying Mama would be forever remembered for giving the world a good son personified by Governor Aregbesola.

Governor Ahmed added, “We have come to commiserate with our brother Ogbeni Rauf Aregbesola, the Governor of Osun, over the passing on of our dear mother.

“We have to be grateful to Allah for making Mama to see the successes of her children most especially the landmark achievements made by Governor Aregbesola in taking the people of Osun state to greater height.

“We pray God to give you and other members of the family the strength and fortitude to bear the irreparable loss. May God continue to stand by you, uphold you, guide you and protect you as you forge ahead to develop the state”.

Advising the bereaved on the need to emulate the good legacies left behind by Aregbesola’s mother, Governor Ahmed said “the essence of life is for one to live and leave good legacies behind.” 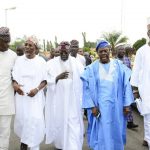