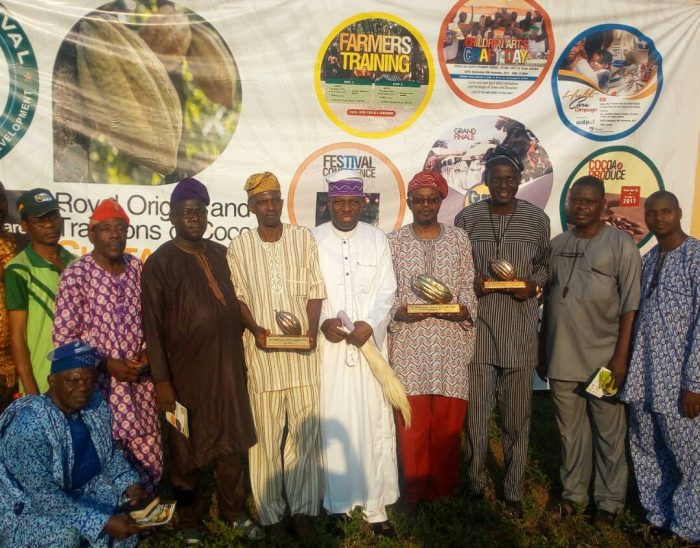 Governor, State of Osun , Ogbeni Rauf Aregbesola was on Friday, honoured with the 1st Nigeria Cocoa Award in recognition of his contribution to agricultural sector through his various programmes particularly the Osun Rural Enterprise and Agriculture Programme (O-REAP).

The Minister of Information and Culture, Alhaji Lai Mohammed and Minister of Agriculture, Chief Audu Ogbeh were also honoured with awards during the event which took place at Eti-Oni community  in the State. The award ceremony was part of activities for this year edition of cocoa festival of the community and 20 awards from 20 categories were given out to recognised individuals, government agencies and corporate bodies.

The CEO/Executive Vice Chairman of Osun Produce Board, Dr Yemi Adegoke who represented Governor Aregbesola and received the plaque of the award on his behalf, said the governor remained committed to agriculture and that.

“Governor Aregbesola set up the state produce board to make sure farmers in this state increase quality and quantity of their produce and make profits as well as generating revenue for the state. Our Governor has been promoting agriculture and he deserved this honour.” In the media category of the award, four newspapers including Daily Trust, Nigerian Tribune, The Nation and Business Day were nominated and the award was won by The Nation newspaper.

The Minister of Information and Culture and Agriculture counterpart  were both given the award of “Overall Outstanding Performance in Agriculture” and “Tourism for Sustainable Development”. The awards for the two ministers were received for them by the Assistant Manager, News and Current Affairs, Nigerian Television Authority (NTA) Mr Adekunle Adebayo.

The Osun Rural Enterprise and Agriculture Programme (O-REAP) also bagged an award which was received by the Senior Special Assistance (SSA) to Governor Aregbesola on O-REAP, Mr Femi Komolafe. He used the occasion to enumerated the various contribution of the state government to  agriculture and motivation for farmers in the state.

Komolafe said the state government had been supporting cocoa farmers with 200,000 seedlings annually with other financial and agricultural materials and other insentives.

Mr Godwin Emefiele, Central Bank of Nigeria (CBN) Governor, also bagged the award for “Cocoa Renaissance in Nigeria” which was presented to him by the Royal Father of the Programme, Oba Saheed Ademola, Elegushi Kusenla III.

He appreciated Nigeria cocoa farmers for their efforts in making Nigerian cocoa acceptable by the European market, which he said were not acceptable some years ago. He said CBN would continue to support farmers in their operations.

Oba Thompson said his forefather, Gureje Thompson brought the cocoa crop to grow in the region in 1896 and that the move then was to facilitate development of the area after the 1878-86 Kiriji war.

During a conference that preceded the awards ceremony, stakeholders dissected issues that concerned cocoa production and value added chain. Mr Babatunde Olarenwaju, one of the panel speaker and a food security expert said more women should be encouraged to go into cocoa production.

Olarenwaju stressed that the ability of women to give birth, nurture and train children is an indicator that they can manage cocoa production, irrespective of the stress and hardship attached to the work.

Dr Balu Balasubramnian,  the co-founder of CocoaTown United States of America, in his own presentation said women played major roles in cocoa processing in other part of the world where he runs his cocoa processing business.

Balasubramnian said giving women a level playing ground and providing them with enough support as their male counterparts would go a long way in increasing and multiplying cocoa turnovers.