…We had no money to buy textbooks before Opon Imo – Students
“We have been asked to buy textbooks so as to prepare for the coming Senior WAEC but most of us have not been able to do that because of unavailability of money. Many of us cannot afford the textbooks and have been wondering how to pass the fast approaching exams.”
These were the words of Adeleke Busayo, a final year student of Adventist Government High School in Ede, Osun State as she receives her “Opon Imo” tablet of knowledge.
In a similar vein, the Head Girl of the school, Oluwatuye Mary buttressed what Busayo said. She stated that most of the students have not been able to afford the needed textbooks for their coming exams, adding that the State Government under the leadership of Ogbeni Rauf Adesoji Aregbesola, has lifted an over-weighting burden through the Opon Imo project.
“I feel so excited, we have been patiently waiting for the Opon Imo since the first day our principal told us about it. I am so happy to get the Opon Imo finally because we have been told to buy textbooks but not all could afford them. Now that the Opon Imo is here, embedded with several textbooks and past questions, the burden of having to buy textbooks has been lifted.
“We are immensely grateful to the Government of Ogbeni Rauf Aregbesola, we really appreciate this privilege and we promise to use it judiciously. Aregbesola has fulfilled his promise with the people of Osun on Education Improvement and we promise to study well and make him proud.” Mary added. In addition to aiding preparation for School Leaving Examinations, the introduction of the tool is expected to aid adoption of information communication technology (ICT) skills among students in the State.
Back in 2013 when the Governor Rauf Aregbesola-led Government of launched Opon Imo, many were skeptical about its sustainability and its effectiveness in combating the low rate of student performance, especially for secondary school students writing final year West Africa Senior School Certificate but four years down the line, the Opon Imo has proven its worth. Apart from aiding students in their exams and guaranteeing their success if properly used, the Opon Imo has also relieved parents the burden of having to buy textbooks especially in this current economy situation.
As usual, the State government has begun the redistribution of e-learning computer tablets for the 2017/2018 academic session to students in the final year in the state public schools.
The redistribution of the tablets began in an informal ceremony at Osogbo Government High School, Osogbo, as the students and teachers were excited to receive the device again.
While the redistribution lasted, 30,000 units of the tablets were given to final year students who will be writing the SSCE, NECO and Unified Tertiary Matriculation Examination (UTME) examinations and their teachers, across the state.

Speaking during the flag-off ceremony at Osogbo Government High School, the Principal of the school, Mrs Folorunsho Ladapo, described Opon-Imo as an unusual education infrastructure in the state.
Also the Administrator of Adventist Government High School, Mrs Uche Agbaso, said the distribution of the Opon Imo is an extra mile on the part of the Governor to enhance better performance of the students.
In her remarks too, the vice principal administration, Mrs A A Oyewole, lauded Aregbesola for the initiative and urged the students to make positive use of the tablets.
Speaking on the nitty gritty of the programme, the anchor, Mr Bambo Basorun explained that, “The government is doing its best to distribute to students a technological device, it is a marriage of technology and creativity, we are tying to make all our children have access to technology, as you can see, this device is being distributed to all SS3 students, the purpose is to help them in passing their exams and it has all their subjects textbooks, it has past questions and answers, it’s a fantastic digital learning tool, it’s a study note, so to say.
“Our Government deem it fit to give our children the best and we have started again this year, we are going round the 120 schools we have in the state now.”
About the controversy surrounding the Opon Imo, Bambo explained that, “As you know Opon Imo has won an award internationally, we won an award four years ago. As far as controversy is concerned, we are unmoved, we are not shaking. It is audible to the deaf and visible to the blind that Opon Imo has come to stay.
“It is a fantastic project and we have not ceased in distributing it four years running now. The teachers are there, the principals are there, the students are there, the parents are there and they will give you wonderful testimonies as to what this government has done through Opon Imo so criticism with objective, we will take it but without objective, we will struck it out.” 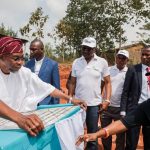