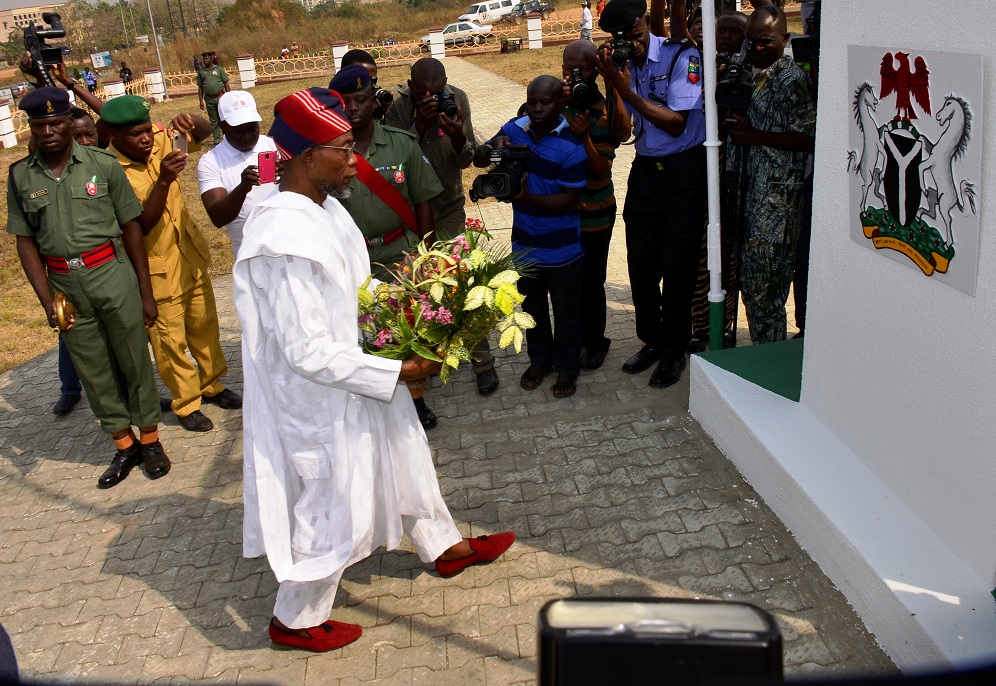 SPEECH BY THE GOVERNOR OF THE STATE OF OSUN, OGBENI RAUF AREGBSOLA, AT THE 2018 LAUNCH OF THE EMBLEM COMMEMORATING ARMED FORCES REMEMBRANCE DAY, AT THE LAWN OF THE GOVERNMENT HOUSE, OKE FIA, OSOGBO, ON MONDAY JANUARY 8, 2018

Protocols,
I soberly and thoughtfully welcome you all to this important national event, the launching of the emblem in remembrance of our soldiers that died and were wounded in war and to honour and support the veterans that are alive.
These are soldiers who gave their lives in wars beginning from the First World War, Second World War, the Nigerian Civil War and the various armed engagements to defend Nigeria’s territorial integrity and keep our people safe. These included the various insurgencies in parts of the country, the latest being destructive militancy in the Niger Delta, the attacks on lives and property in our various communities and Boko Haram insurgency in the North East of Nigeria.
It is interesting that Nigeria celebrates her fallen heroes on January 15 of every year, as against the practice in the commonwealth countries that celebrate this unique event on November 11. This is to commemorate also the Nigerian Civil War that was fought to keep Nigeria one.
In all these wars, many lives have been lost, many more wounded and unquantifiable property destroyed. Many of the wounded regrettably lost limbs, while others suffered permanent incapacitation requiring hospice and dependency for the rest of their lives.
There are others alive that carried scars from the horrors of war, on their minds that may never heal. We pray that God almighty will comfort them and heal their souls.
The bodies of many of the soldiers were never recovered and therefore never received befitting burial. They only live in the memories of their loved ones and the record of a grateful nation who will never forget their heroism and the supreme sacrifice they paid for our peace and security.
War, no matter how justifiable, is bad business anywhere. This is why we must all work towards avoiding one, at all cost. When a soldier is killed, a dream dies. A woman becomes a widow, some children lost a father and some parents lost a promising son.
For all the soldiers that died, an army of dependants emerged who must be taken care of by the society. That is why we are here today – first, to honour the memory of the fallen heroes and then to take care of their dependants and not less important, to honour and also take care of those soldiers who are still alive.
We must all remember the factors that led to the wars that claimed such noble lives. A common factor being mindless pursuit of one’s interest, not caring how it affects others and what will be the consequences. Another being the penchant to incite others to hatred and violence.
Others include the false sense of racial, religious or ethnic superiority and the tendency to look down upon and oppress those that are different from us religiously, ethnically, socially, economically, politically and ideologically. We must not forget also the social and economic inequalities in the society that concentrates 90 per cent of societal wealth on less than five per cent of the privileged few. This has bred an army of hungry and angry youths that have become easy recruits for militancy and societal destabilisation.
The most pronounced cause of war is military rule – the tendency for soldiers to abort civic democratic rule and plunge the nation to chaos, only to find out that they themselves are not better than the civilians they overthrew. Decapitation can never be the cure to headache.
The best way to honour the memory of the dead is to prevent wars, in order that their sacrifice will not be in vain.
We must find a way to make the veterans to be productive. It is regrettable that our society has only engaged them in security and mostly driving duties. Many of them have acquired skills in the professions that would have been more beneficial to the society more than these two.
The veterans have a lot to contribute to the development of the society and should be engaged maximally to be very productive. The veterans should also demonstrate good citizenship by being law abiding in the society. Too often they tend to settle dispute with force, side stepping the rule of law, in a way that suggests that they do not subscribe to the rules of the larger society.
This emblem we are launching is one way to support the families of the dead, care for the wounded and the veterans. I wholeheartedly support it and recommend it to all members of the society, starting from members of the State Executive Council.
I thank you all once again for being here and for keeping alive the memory of our heroes, dead and alive.
I thank you for your attention.
Osun a dara! 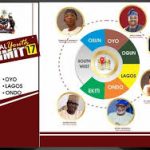 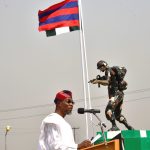