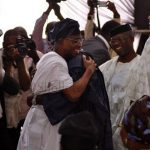 PHOTO NEWS: In The Spirit Of Sportsmanship - Aregbesola, Oyinlola SpottedOctober 17, 2013
Johnson, Aregbesola, Others To Be Inducted Into ADA Hall Of FameOctober 18, 2013