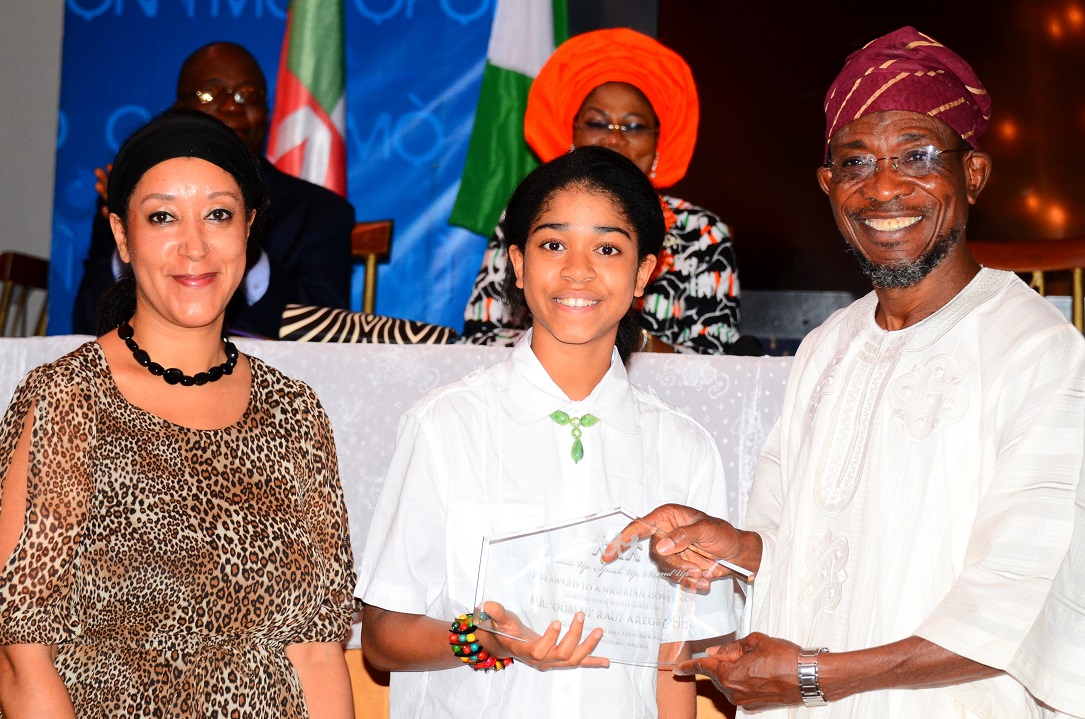 Governor Rauf Aregbesola of Osun State was today (Wednesday) bestowed the award of The Most Innovative Governor Supporting Education in Nigeria. This was conferred on him in Osogbo by Zuriel Oduwole, the ten year-old Nigerian girl who has made history as the youngest person ever to be interviewed in Forbes and was quoted as one of the 100 most influential Africans.

Speaking on what informed the confirment of the award on Governor Aregbesola, Zuriel said, “It is difficult for a child to learn without the right learning aid. Good learning aids have been made possible for students in this part of the world. It is in recognition of this that on behalf of the ‘Dream Up, Speak Up, Stand Up’ Project that I present the award of the most Innovative Governor in Nigeria supporting Education to Governor Rauf Aregbesola.”

Governor Aregbesola said the occasion was more to celebrate the achievement of Zuriel as a way of stimulating Osun children and Nigerian children at large to have high dreams for them to serve. And through serving recognition would come.

Directing his address to some public school students in attendance, Governor Aregbesola noted that the intention of Zuriel was to promote the interest of the less privileged children across the world. He added that despite her young age of 11, she has made tremendous impact on African children.

“What that implies is that age is not a barrier to making other people’s lives better,” he said.

Governor Aregbesola described the circumstance around the award as a manifestation of the remarkable efforts of his administration in the development of education since he came on board.

“Indeed Osun won two of the four International Awards in education for the continent. That means that something good is happening in this part of the world and this goof thing must continue.”

The award winner explained further that the award ceremony underscores the fact that Africa is making serious positive efforts to change the lot of the people for the better, with Nigeria being in the vanguard of the developments.

“It is even more gratifying for us in Osun that our state is helping to put Nigeria in that lead position”, he stressed.

“For this to happen, it was deemed necessary for us to have free education at the primary and secondary levels; to rebuild the decrepit physical infrastructure; and to urgently tackle the problems affecting the teaching staff, among other things.”

Zuriel was accompanied by her parents, and three siblings. Members of her Project Team were also in attendance.

Zuriel Oduwole is the epitome of what parents want their children to be. At age 10 in 2013, she became the youngest person in the world to be interviewed by the world renowned Forbes magazine. She has interviewed more than 13 Presidents and Prime Ministers. She was named by New Africa last December as one of Africa’s 100 Most influential people of 2013, and is the head of the Dream Up, Speak Up, Stand up project, to inspire Girls in Africa to stay in school.

Zuriel has been featured in many newspapers, magazines and TV programs in Africa, Europe and the USA, including the BBC.

She arrived from Brazil and Ethiopia last week, where she is taking 2 footballs across 3 continents to 6 countries where they are being signed, to make the case for Girls Education. An award winning documentary maker, she hopes to make a documentary about the balls traveling, to bring additional aware to children’s education. 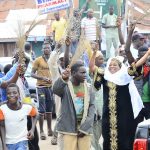 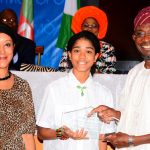