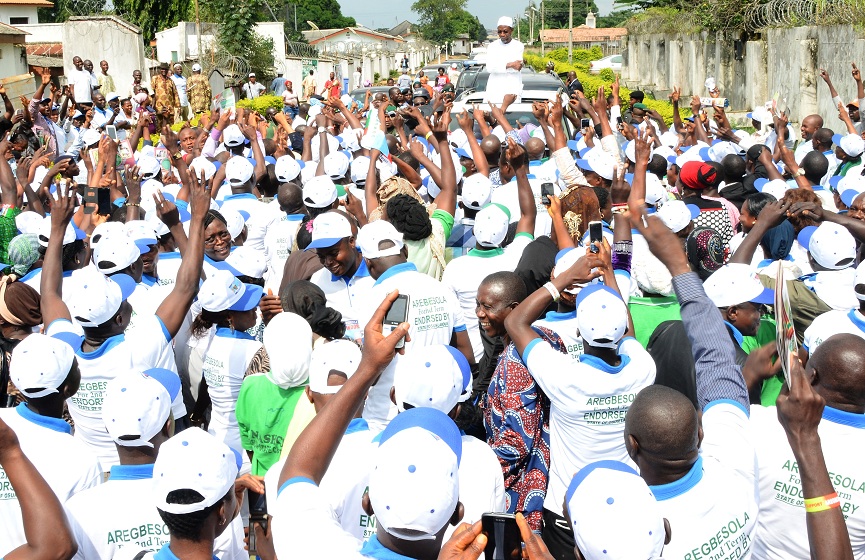 Students in their thousands on Wednesday defied stern looking security agents in Osogbo‎ who had laid siege to the Nelson Mandela Freedom Park venue of the scheduled adoption of the governor of the state, Ogbeni Rauf Aregbesola as their candidate for the August 9 election.
The students under the aegis of Youths and Students Coalition for the re-election of Aregbesola took to the Olaiya Junction in the heart of the State Capital and marched to Ogo-Oluwa axis of Osogbo before they converged at Fakunle area to address members.
The student coalition which comprises of National Association of Nigerian Students Joint Campus Committee‎, National Association of Osun State Students (NAOSS) and all other students associations on campuses.
Convener of the Youths and Students Coalition group, Comrade Abiola‎ Oludele, stressed that the Independent Electoral Commission should be fair enough to conduct credible election in Osun, saying Youths in the state will take no excuse for any failure.
According to Oludele,”We want to use this medium to charge INEC to conduct an election that will be seen by all as free and fair. Youths in Osun will take no excuse for their failure and any attempt to go against the popular wish of our people will be resisted.
“Youths and students coalition wish to inform INEC and security agents deployed to the state that we bargain for nothing other than free and fair governorship election come August 9.

“People as the owners of votes, we do not need any clearance to monitor, safeguard and protect ‎our votes.

“We wish to state it clearly that we are fully aware that various security agents and others deployed for our protection and as such should not be turned to instrument of oppression and harassment before election.

“It is important for INEC to note that the duties of its officers are not expected to be carried out by any of the security agents in any of the polling units across the state,” The Youth association pointed out.
It will be recalled that Mobile policemen and the Military men ‎were seen on Wednesday morning turning back people who had arrived the Mandela Freedom Park, venue of the event for the endorsement of the governor by the students.

The Bureau of Communications and Strategy in the Office of the Governor, commenting on the development said it was unthinkable that the PDP-led Federal Government is allowing this to happen at this stage of Nigeria’s democratic journey.

“One is miffed by the audacity of the security agents who dared to stop members of the workforce of Osun and students who wanted to adopt the Governor today and tell the whole world that they are behind Aregbesola.

“But we are consoled by the fact that the people have shown them their power. People have demonstrated that even in the face of intimidation, they are peaceful but resolute on the decision to vote for Rauf Aregbesola,” said Semiu Okanlawon, Director, Bureau of Communications and Strategy, Office of the Government 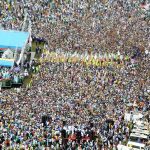