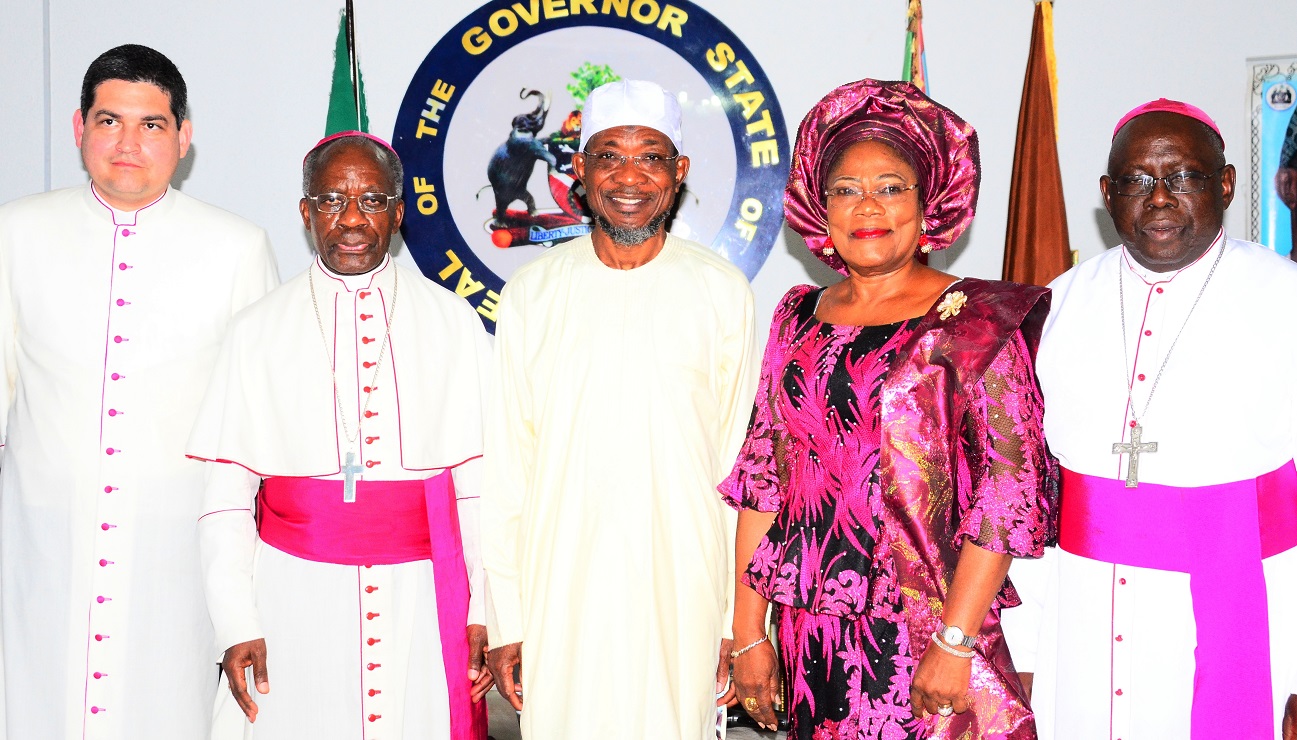 The representative of the Catholic Church Pope, Papa Nuncio, Most Reverend Augustine Kasujja, has commended Osun State Governor, Rauf Aregbesola for his extreme spirit of solidarity, cordiality and hospitality.
The international religious cleric also applauded the state government for adopting policies that facilitated equity among the members of the existing religions.

Rev. Kasujja who led the delegation of the Catholic Church, made the state during a courtesy call to the state governor, at government house, Osogbo.
The cleric stated that the antecedents of the present administration in the state was a clear manifestation to the fact that, Osun remains one of the states in the country with high level religious tolerance.
Rev. Kasujja who described  Governor Aregbesola as a religious peacemaker, said the Governor’s reception is very exceptional even in spite the fact that he is a muslim.
The cleric applauded the state for resorting to dialogue whenever there is misunderstanding, saying greater impacts of the state on religious propagation would be forever commended.
He averred that the process of dialogue in solving disputes and related issues had over the years contributed significantly towards the mutually beneficial relationship between and among the various faiths in the state.
Rev. Kasujja who described dialogue as the only mechanism to avert violence, pledged catholic’s commitment to continuous spirit of dialogue in resolving issues.
He called on the adherents of all religions to champion dialogue as the only tool capable of restoring peace, love unity and togetherness, saying any attempt to wave this off, the society is doomed and crumbled.
Rev. Kasujja said very individual must as a matter of necessity seeks peace, adding that once it missing, one is demanding for vendetta which according to him can cause unavoidable societal catastrophe.
He said, “the essence of life is love and every human being must brace up this indispensable valuable to ensure peaceful cohabitation.
“By extension, every human being is created to propagate the continuity of the existing peace and as well ascertain and maintain peaceful co-existence among themselves.
“Based on these reasonable reasons, all religious adherents must imbibe the noble spirit of dialogue for better mediation and reconciliation whenever there is natural misunderstanding.
“We must accept and tolerate one another’s beliefs as we are created to relate without any form of violence.

Rev. Kasujja lamented over the state of education in Africa, saying there is a need for government at all levels to come up with a modality that would transform the state of education across the continent.
He therefore sought for more cooperation and support from government at various levels, saying once government does the needful, the socioeconomic, religious, political and cultural matters are solved.
According to him, ” it is unfortunate that most of the schools now are not in the right positions, but we believe strongly that with sincere change in our attitude, things would get better.
Earlier, the Catholic Bishop of Ibadan Diocese, Reverend Gabriel Leke Abegunrin, described the current government as the great supporter of the Catholic Church.
He attributed the support and collaboration being received from the state government to what he regarded as strong commitment of Governor Aregbesola to religious’ propagation.
Rev. Abegunrin who commended the efforts of the present government in maintaining peace and unity amidst diverse religious faithful, said it is on record that Osun remains one of the states in Nigeria that have done justice to the existing religions.
According to him, “I am happy that Osun government under the leadership of Governor Aregbesola has proven the required sincerity and justice to religions as expected from any leader whatsoever.
“Obviously Osun government is a great supporter of our church. The government has already established a very unique, robust and healthy relationship not only to Catholic members or muslims, but by extension, the christian community and other religious faithful.
Rev. Abegunrin who charged residents of the state on the need to promote love, unity and co-existence irrespective of religious differences, advocated religious tolerance as the major instrument to put an end to the current religious challenges.
Rev. Abegunrin who condemned in its entirety the alleged religious crisis that trailed the judgment of the State High Court over the right to wear hijab by the female muslim pupils in the public schools, said if dialogue had been given its best place by the protesting set of the christian community, the matter wouldn’t have escalated.
The religious leader who described the court order as valid, said not until a court injunction is being proved otherwise by an higher court, such verdict remains valid.

He noted that the only way out for whoever feels being dissatisfied with the court injunction was to approach a superior court and file an appeal towards the lower court judgment, saying the case of hijab would have put to rest if the aggrieved had taken a legal direction.
Rev. Abegunrin pointed out that the court injunction which had created a lot of disaffection among the members of the populace due to over anticipation, would have been intellectually averted if proper steps had been taken.
He called on the people to always address issues with passion especially issues that bother on religions, saying proper understanding of the constitutional procedure in seeking a redress, would in greater measure helps to avoid unnecessary societal fracas.
The cleric described catholic community as a peace-loving religious body, saying as far as christianity is concerned, there is no room for violence.
Rev. Abegunrin who declared as uncalled for, the wearing of ceremonial garments to schools by the christian pupils, adding that such act amounts to a complete religious aberration.
In his remarks, the Governor of Osun, Ogbeni Rauf Aregbesola who commended the leadership of the Catholic Church, said no efforts would be spared to ensure peace and tranquility in the state.
Governor Aregbesola said peaceful co-existence among the citizenry remains un-negotiable, emphasizing that his government would do all it could to continuously foster desired cordiality, love and peace among the religious faithful.
The Governor reiterated his determination to continuously prioritizing justice and equity among the existing religion, noting that his government had never accorded preference to any religion.
According to him, “We have no ill-feelings to any set of religion as we strongly believe that religion is an instrument of refinement and instrument of developing capacity for human beings.
“Our government also believe that religion is an instrument of testing human beings to restrict provocation towards the development of every human being for higher spiritual attainment.
“Therefore, when religions failed to do these, there is a need to challenge the adherents of such religion.
Governor Aregbesola canvassed love as the only mechanism to entrench peaceful relationship between and among the people of diverse religious philosophy.
He said, “As a matter of fact, all founders of religions today need love to centralize faith into their religions, thus, there is no other means at all as to love and compassion.

“The cardinal focus of all religions is love. Though differences occur in the methodology of attaining goals.
“I am always disturbed when we human beings discriminate, develop hatred and so on against their faiths because to me, I believe strongly that there is no iota of doubt in the sense that religion means love, compassion, unity and accommodation.
Governor Aregbesola who supported his claims with three fundamental religious facts, said faith, hope and love must not be undermined in any of the existing religions.
According to him, “There are three fundamental factors that enshrines religion, such as faith, hope and love and as big as they are, love is most superior because it brings comfortability, peace, unity, togetherness and tranquility.
“Obviously, love is the end of all loss and as a matter of fact, no religion should skip this vital instrument in its orthodoxical doctrines, principles and standards.
Governor Aregbesola therefore promised to continuously build healthy relationship among the religious adherents.
“Catholic church has been particularly supportive to our administration and I want to encourage the church to continue with that.
“We will work extremely with the leadership of your church, and other denominations to bring about a peaceful state where our people can go about their lawful economic activities, social and cultural engagements without molestation.
“Our focus is to ensure that every citizen lives a good life with joy, happiness and prosperity”, he added.
Meanwhile, one of the members of Osun Development Association, Professor Olu Aina said the association had reached a common ground with the protesting members of the christian community to put an end to the lingering hijab tussle in the state.
Prof. Aina who assured the people of the state on peaceful relationship vowed that the association would deplore necessary measures to ensure stable peace in all parts of the state.
“We have met with the leadership of the Christian Association of Nigeria, CAN on the need to over look any form of religious differences among the adherents of the existing religions.
“To this end, we hope that henceforth, nothing as such would replicate in the state”, he stated.

Osun and Hijab Politics: Rule of Law Must Be Protected, By Olumuyiwa Wahab JimohJune 29, 2016
Aregbesola Tasks Workers on Improved IGRJuly 1, 2016