The Governor of Osun, Ogbeni Rauf Aregbesola has charged state workers to employ necessary measures capable of increasing the state Internally Generated Revenue, IGR, in the face of the current economic reality.
The Governor also called for prudency, transparency and accountability in the process of managing the limited resources of the state for greater economic productivity.

Governor Aregbesola gave the charge during an interactive session with Permanent Secretaries and Directors in the State Public Service, at Multipurpose Hall, Local Government Service Commission, State Secretariat.
The Governor who lamented over the adverse effects of the current economic situation, however directed the state workforce to complement government efforts towards the generation of improved revenues.
The state helmsman who described Osun as an agrarian agricultural state, said the time has come for it to diversify its economy in its bid to augment and strengthen the capacity of its economy for the betterment of all.

Governor Aregbesola identified workers as a formidable organ in governance, saying their contributions towards the attainment of economic prosperity can never be overemphasized.

The Governor who lauded the significant contributions of the state workers over the years, however attributed some of the achievements recorded by his government to better understanding and cooperation enjoyed from the workforce since assumption of office.
He recounted the abysmal state of the economy when he assumed office in 2010, saying with the meaningful contributory efforts and mutually beneficial relationship between workers and government, his government had made memorable feats in all aspects of the economy.
Aregbesola stressed the need to jack up the revenues accruable to the state from all sources, noting that the only realizable alternative to cushion the dismal tendencies of the current economic downturn was for the state to double efforts in blocking all the leakages hampering sustainable IGR of the state.
He warned against lackadaisical attitude in the civil service, saying all workers must henceforth work in tandem not only with civil service rules or code of conduct, but as well as the state’s policies on new revenue generation regime.
Aregbesola who set a target of N10billion to be generated as monthly revenue for the state, said in recognition of the current economic situation, coupled with the available statistics, the state has the capacity to generate N5billion every month.
The Governor implored workers to adopt the new government policies on revenue increment, saying the decision was taken to seek for complementary efforts of all in the government bid to continuously thrive at meeting up its constitutional responsibilities.
Aregbesola who attributed some of the economic challenges bedeviling the country to what he regarded as “political insensitivity and lack of proper administrative direction” in the past administrations, said his government would leave no stone unturned in its resolve to turn around the socioeconomic fortunes of the state.
The Governor who called for an urgent economic intervention, said going by the current economic trends overtimes, no government should rest on its oars to bring about relief capable of transforming the state of the nation’s economy.
He said the time has come for every reasonable government to go back to the economic drawing board and map-out policies capable of bringing general succour not only to the states but the entire nation.
According to him, “It is regrettable that we found ourselves in this economic mess but by and large, all hands must be on deck to revamp our economy and rise again.
“We must deploy all the available mechanism to raise our IGR and as well improve the standard of living.
“Going by the available statistical records, our state is capable of generating at least ten billion (N10billion) every month, and for us to achieve this, all hands must be on deck for a common goal.
“This revenue proposal calls for a reciprocal commitment of all citizens especially the workforce in our bid to continuously meet up with our obligations.
“The time has come for us to diversify our economy especially in a bid to meet up with our set goal of generating at least N5billion every month.
“Irrespective of the present economic challenges, our state if properly organized in term of revenue generation, can conveniently generate N5billion monthly just as its sustainability would in no doubt increase the tempo to more than N10billion monthly.

“For us to achieve these feats, every citizen must work together and demonstrate high sense of commitment to government policies for better and greater economic condition.
“To us as government, the time of free money has gone just as everyone is expected to work for whatever he/she would earn.
“Every worker must justify what he/she earns by demonstrating high sense of commitment, loyalty, competence and transparency in all he does.
“We have entered into the era of self-sustenance. Era of self economic dependence and reliance, thus giving room for every government to strive tirelessly on the need to restrategize on better revenue generation.
“Any government who fails to accede this economic reality, would in no doubt become a parasite to others.
“Despite the current economic challenges, our government would do all within the framework of the constitution to jack up the state’s revenue”, he added.
Governor Aregbesola said in fulfillment of its government’s constitutional responsibilities, the current N600million monthly IGR regular was too low to cater for its obligations.
Speaking on the state of the nation’s economy, Governor Aregbesola decried over what he regarded as “unprecedented corruption” characterized with the immediate past administration of former President Goodluck Jonathan.
He stressed that if the nation’s God-given abundant resources had been properly channeled, Nigeria would have been in a relatively economic condition.
The Governor contented that more than average of Nigerian is living in abject poverty due to the poor leadership ,incompetence, lack of focus and mismanagement, hence he called for noble and proper intervention of the wise before it gets out of hands.
Governor Aregbesola said all hands must be on deck to revive the state economy especially at the point majority of the nations in the world are battling with the untold economic hardship and as well struggling to avert and reposition the economy. 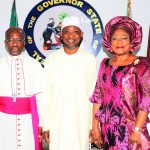