The State Cash Transfer Unit(SCTU) has been urged to make the best use of the Single Register of the poor and vulnerable households in the state.

The Coordinator, Osun State Operation Coordinating Unit, Youth Employment and Social Support Operation(YESSO), Mr Olufemi Ifaturoti stated this while handing over the Single Register to the State Cash Transfer Unit(SCTU‎).
Mr Ifaturoti said Cash Transfer programme ,which is a social safety net intervention anchored by the Federal Government in collaboration with the World Bank ,is to lift the poor and vulnerable out of poverty through transfer of funds and life skill training .
He pointed out that it is an offshoot of the highly successful YESSO initiative, which he maintained is equally an offshoot of the greatly remarkable Osun Youth Empowerment Scheme(OYES) initiative of Governor Rauf Aregbesola’s administration.
The State Coordinator added that the Single Register of the poor and vulnerable which was generated through dint of hardwork of his SOCU team and a painstaking process became inevitable with a view to correcting the hitherto targetting mechanism of safety net interventions in the country which was so weak to the extent that it encouraged double dipping.
In her response at the event, the Desk Officer, State Cash Transfer Unit(SCTU), Mrs Adeola Oyebamiji assured Osun State Operation Coordinating Unit that SCTU would not rest on its oars at making the best use of the Single Register. 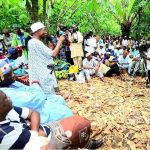