Though it started small at the at the popular old garage in Osogbo, today, it is s a long expanse of sprawling beauty, spanning a huge land mass from the old garage through old Ile Epo Olaiya to the old Fakunle in Osogbo, giving the sleepy town a new look expected of a city.
This long stretch beautifully sculpted and designed, encapsulates the culture, history and essence of what Osun stands for in a modern and standardized mode. Welcome to the Nelson Mandela Freedom Park, a recreation spot that can be described as an unraveling profile in tourist beauty.
Though the area was part of the central business district, it never enjoyed the beauty and attention of that should characterize a city center; it was previously synonymous with ramshackle structures, destitute and beggars and car parks as well as street traders long the edges of the road, proliferation of miscreants and hoodlums and a very dirty and haphazard arrangement, giving the place the look of a ghetto.

Today however, the recreational and aesthetic beauty of the park is a testimony of a huge turnaround in planning, beautification, aesthetics as well as cultural history and social facilities, making it a regular point of call for different classes of citizen and creating an opportunity for a night out in a safe environment among the people.
Indeed, to people that had not visited the town for a while, it is easy to get disoriented as the old ile epo Olaiya and old garage that is the first stop for many coming into town is no more the plain area that they know; there is an obvious and consistent change in the look the area wears and Osogbo is quickly shedding its ancient toga and is rapidly metamorphosing into a modern city.
The dramatic change is so obvious and defining that people who aren’t familiar with the new layout may find it difficult to find their way around the city which is now looking completely different.

And one of the things that made a difference aside the new roads is the Nelson Mandela Freedom Park, which has not only beautified but has changed the terrain and landscape of the city.
As beautiful as the park is at day, the sight at night is spectacular, making the sight and sounds of Osogbo at night an attractive experience. As expansive as the park is, the roads are well tarred and the garden has lush vegetation, landscaped to create a pretty picture of modernity, culture and history.
The whole Freedom Park is completely lit at night, giving an ambience of beyond average setting and novel euphoric experience. The park comes with a big hall for restaurants, events arena and a water fountain called the Atewogbeja Water Fountain which is surrounded with seats for people to sit, relax and enjoy the undiluted beauty of a serene environment.
And despite the movement of vehicles and human activities around, the park which is yet to be completed but is already being used by residents, stands aloof in contrast to activities going on around it, forcing anyone inside to slow down and forget the worries outside.

The emerging scenery is one of lush vegetation, landscaped to give the look of an environmentally friendly place with a garden and play ground for residents and visitors while a section is constructed to serve as a venue for big events like political rallies, crusades and other social activities and a holding park for travelers who do not want to take their cars out of town, as there is a facility in place to take custody and secure their cars by the park management until they return at little cost.
The Mandela freedom park is constructed in a way that provides recreation for children and adults which features walking paths and decorative landscaping that has all the trappings of an urban infrastructure and is appropriate for physical activity for individuals and families while it can also cater for communities to gather and socialize or just relax.
The layout was planned with consideration to the needs of the physically challenged and the aged and at present, the park already playing a huge role in giving the city the shape required of a contemporary site.
The railway line cuts across the park in the center giving it a linear shape and to protect people from the hazards of crossing a rail trail, the track is protected with a see through wire fence while pedestrian bridges are constructed few meters from each other through the park for people to move from one side to the other without the fear of being run over by a train.
When completed, the freedom park beyond adding beauty to the city, serve as recreation sites for tourists as well as residents and prove that the government is interested in urban renewal, will due to the attraction it holds for people of all classes, serve as a source of income generation for the government.
Speaking with Nigerian Tribune, one of the facility managers at the park, who declined to give his name, stated that the project is part of the beautification process of the government and a bid to upgrade the status of the ancient town to that of a city and a state capital, adding that what the government is doing is not strange as it is part of a long laid plan.
“What the government is doing is not just an haphazard thing. You know in the early days, Osogbo is a district town which was planned by the white man. The projects you see now are part of a master plan designed very long ago buy was not followed by previous governments, the original plan is that the central business district stand out as an attraction in every way possible,” he said.

One of the people that came to relax at the park who identified himself as Mosun Adeola stated that she comes to the park most evenings after work just to unwind as the atmosphere is always calm.
“I don’t know when this became an habit but I found it so relaxing coming here to just sit and watch people and activities around; it is usually like I am watching a different world from mine and I like this. So many people come here regularly but I only come on weekdays because there are usually plenty of people here at weekends and I don’t like crowds.
“What the government did here is good, it’s like giving the people a new experience and we can proudly say we live in a city. I don’t know what motivated the government to do this but I believe it is a steep in the right direction. The town is looking so different and not as ancient as when we were growing up and coming back home to live is seriously looking like the best decision for me.
An elderly man who preferred to be called Pa Adenle also lauded the initiative, adding that coming to relax at the park is an highlight of his day but he added that the government should take the innovation to other cities in the state so that anywhere you go in the state will be a tourist attraction and people will not be tempted to move in huge numbers to Osogbo from other towns, causing overpopulation and its attendant challenges.
“I am happy this is taking place in my lifetime, I never knew my hometown could become this beautiful. This development should be extended to all the cities in the state, transforming everywhere to a place people would love to live,” Pa Adenle concluded.
Other interesting facilities at the park includes a design of fruits to show agricultural prowess of the state,  a monument of brief history of past leaders, both military and civilian and  a monument of statues of respected Yoruba leaders including Chief Obafemi Awolowo, Chief Bola Ige, Chief Bisi Akande and Asiwaju Bola Ahmed Tinubu among others. 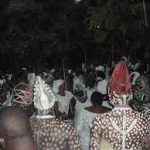 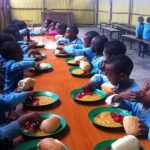