The House of Representatives has urged the National Emergency Management Agency, NEMA, to urgently send relief materials to the displaced victims of the  communal disturbances at Ile-Ife, Osun State, who are at various facilities across the state.
It also urged the Osun State government to compensate victims of the crisis to accelerate the return of normalcy in the area.

The lower chamber also resolved to send a five-member delegation to convey its sympathy to the government and people of Osun State, as well as the leaders of the Hausa community and other stakeholders.

It urged the Federal Government to liaise with the state government to demilitarise and disarm members of the community.

These decisions followed a call  by a member of  the House of Representatives, Mallam Muhammed Zorro (Jigawa-APC), who urged the media to exercise discretion and utmost restraint in reporting crises.
He made the call yesterday, while moving a motion on the communal disturbances at Ile-Ife.
Zorro appealed to newsmen to avoid raising undue anxiety capable of aggravating crisis situations.

He recalled that the unfortunate disturbances between the Yoruba and Hausa communities in Ile Ife began last Wednesday, but that efforts were ongoing to restore normalcy.

According to him, the Osun Government, the Nigeria Police Force, traditional rulers and other stakeholders are making efforts at de-escalating tension and restoring normalcy.

“I appeal to the media, particularly the social media, socio-cultural organisations and all other commentators to exercise discretion and utmost restraint in reporting and commenting on the incident. “This is to avoid raising undue anxiety capable of aggravating the situation,” he said.

In his ruling, Deputy Speaker of the House, Mr Yussuff Lasun, mandated the Committees on Police Affairs, Human Rights and Emergency and Disaster Preparedness to monitor the unfolding events.

Kwankwaso visits
Meantime, the former governor of Kano state, Alhaji Rabiu Musa Kwankwaso, yesterday assured the Yoruba living in the northern parts of the country that his people would not lunch reprisal attack against them following last Wednesday’s bloody clash in Ife. The Senator representing Kano

The Senator representing Kano Central  who visited the Sabo area of Ile-ife, where the crisis ensued between Yoruba and Hausa in the ancient town allayed the fear of Yoruba of possible attack on their lives and property.

Speaking with newsmen  after the meeting held inside the mosque with some of the victims of the crisis, Kwankwaso assured that his people would not launch reprisal, saying “the purpose of my coming here is to appeal to my people to continue to be law abiding.”

According to him, “I told them that when I get home, the Kwankwasiya Foundation will plan how to send our own support.

The former presidential aspirant of the ruling APC urged the Hausas in Ile-Ife to remain calm, saying they should desist from any action capable of disrupting the peaceful move by all stakeholders to settle and forestall  recurrence. 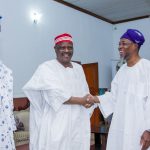