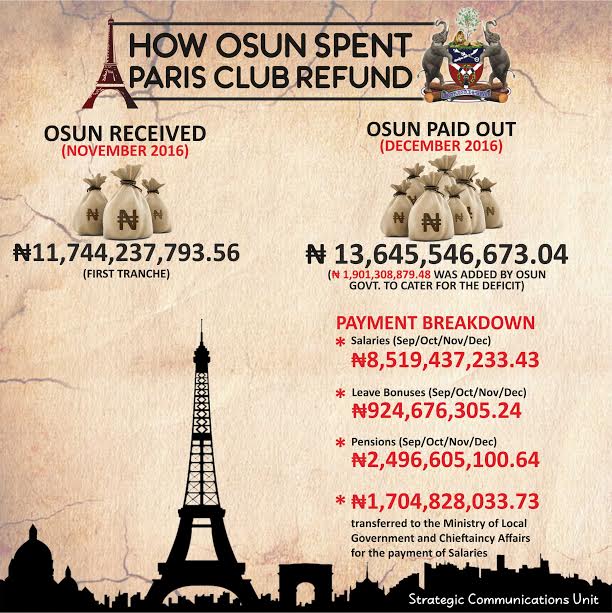 In December 2016, when the state government of Osun paid out the sum of N13,645,546,673.04 to clear salaries, leave bonuses and pension arrears of four (4) months, many did wonder how the Paris Club refund received a month earlier was allocated.

However, the Accountant General of the state of Osun, Mr. Akintayo Kolawole, has revealed, how the state government expended the sum of N11,744,237,793.56 received from the federal government in November 2016 as first tranche of the Paris Club Refund.
Speaking with Journalists at his office in Osogbo, Mr. Kolawole revealed that the Osun Revenue Apportionment Committee headed by Comrade Hassan Sunmonu agreed for the total Paris Club Refund to be spent on clearing workers salary arrears.
“The revenue apportionment committee agreed that the Paris refund be used in paying salaries and that the sum of N1.9bn be added by the state government to augment salary payment to local government workers,” Mr. Kolawole noted.
Speaking on how a total of N13.6bn was used in paying salary
arrears, Mr Kolawole stated that, “the sum of N8,519,437.233.43 was paid out as salaries for September, October, November and December. Similarly, the sum of N924,676,305.24 was paid out as leave bonuses for the four months, while the sum of N2,496,605,100.64 was paid in pensions for the same period.”
Explaining how the state spent above the N11.74bn received as Paris Club Refund, the accountant general noted that the sum of N1,704,828,033.73 was transferred to the ministry of Local Government and Chieftaincy Affairs for the payment of salaries at that level.
When contacted, State Chairman of the Triangular Pensioners Association, Prince Rotimi Adelugba confirmed all pensioners in the state received four months of pension arrears as agreed with the state government in December 2016.
Other workers in the state commended the government for making workers’ welfare its priority.