Information officers in the employ of the state government of Osun has been urged to be abreast of the latest technology available in the
media and in the act of information dissemination.
The Hon. Commissioner for Innovations, Science and Technology, Engr. Remi Omowaye gave the charge while delivering a lecture at the
on-going training workshop for Information officers, Sound, Graphic Artists, Film and Photo Journalists organised by the Ministry of
Information and strategy.
Speaking on the topic, “Information officers and ICT”, Engr. Omowaye stated that information managers have no choice but to key into the new trend in the media industry.
He enjoined information officers as well sound and graphic artists in the Ministry of Information to improve on their style of production as it concerns their weekly documentary programmes on television stations across the state.
He admonished the participants to see it as a point of duty to always propagate the programmes and activities of government as it affects
the masses in the state.
Speaking in the same vein, Commissioner for Information and strategy, Mr Adelani Baderinwa, encouraged participants to justify government’s investment through the workshop by improving on the delivery of their responsibilities.
He assured that the administration of Ogbeni Rauf Aregbesola will continue to provide the support and enabling environment for information officers to do their job more conveniently.
In the second paper titled “News Writting For Radio and Television” delivered by ace broadcaster and a former Director General, Reality Radio-Vision Services(RRS), Mr Kayode Adedire where he urged information officers to be brave in their report as long as it is the truth they are reporting.
He described objectivity as the hallmark and beauty of journalism, noting that the information officer is the bridge between the
government and the people.
The last lecture for the day featured a one time Director of Programmes, OSBC and former Director of Finance and Administration,
Ministry of Information, Mr Foluso Adedigba who spoke on “Quality Programme Production”
Mr. Adedigba told participants that they must see documentary programmes as a means of communication, stressing that the purpose of
the communication must be to inform, educate, persuade, motivate, entertain and attain goals.
He took participants through the rudiments of diction, spellings and pronunciation, noting that the diction or pronunciation of words by a
presenter could make or mar a well written script.
The grand finale of the workshop comes up on the 20th of December where the Governor of the state, Ogbeni Rauf Aregbesola is expected to be in attendance to formally draw the curtain on the programme. 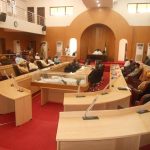