Aregbesola At 61: An Inventor Of Modern Osun

Beyond the Adjectives of all languages of the world, I chose to describe the governor, State of Osun, Ogbeni Rauf Aregbesola in the word of Robert Green Ingersoll that; “A great man is a torch in the darkness, beacon in superstition’s night, an inspiration and a prophecy”.

Though, there are countless political philosophies and ideologies globally, the particular one embraced and deployed by the Symbol of good governance, my mentor, the creator of the modern State of Osun, Ogbeni Aregbesola is still unknown to other Nigerian politicians especially in his class as they are witness to his political might.
While examining the personality of our amiable governor, especially as touching his roles in Lagos, Osun and Nigeria’s political scene at large, one would be left with no other option than to agree with the word of elders that says, “the Head of an Elephant is not a load for the young”.
Through good governance and exemplary leadership, Ogbeni Aregbesola has been able to create a prosperous state out of the previous Osun with infrastructure development at its lower ebb.
In both his first term and the ending second term as Governor, this achiever has retooled the state and gave it an enviable economic strength, so strong that the state now rank among the prosperous states in the country, particularly as one of the states with lowest unemployment rate.
In whatever manner you peruse the life of this giant of kindness, whether as a husband, or a father, an engineer, a politician, a democrat, a master strategist, a great investor, a philanthropist, an optimist, a dogged fighter, you are confronted with rainbow in its full splendour.
Like the National leader of our great party, All Progressives Congress (APC), Asiwaju Bola Ahmed Tinubu, countless leaders and future leaders have emerged and are still emerging from the camp of Ogbeni Aregbesola, one of which I am.
He is a determined friend of the masses and benefactor of many. Ogbeni radiates a life of captivating literature, and his comportment appeals to the lofty, the intellectual and the inspirational.
Beyond his political sagacity, his administrative acumen in unrivalled going by series of innovations he has introduced to governance which the people of Osun will continue to appreciate.
It will forever remain in history that Aregbesola is one governor that is aggressively aggressive to develop his territory in a hurry, irrespective of hindrances, particularly as touching finance.
His agenda for development is not for Osun alone, it is for the entire Yoruba states and even Yoruba race and Africa in general. This is the highest form of demonstration of commitment that can be exhibited by any individual, either private or public.
There are testimonies here and there that our Ogbeni, the symbol of good governance has brought unprecedented development to the territory called Osun within the last seven years in all sectors of governance, talk of education, infrastructure development, security, economic re-engineering, rural and urban development, agriculture, youth and women empowerment, environment, healthcare delivery system and others.
There are also several social intervention programmes for youths like Osun Youths Empowerment Scheme (OYES) that has engaged over 40,000 youths and made majority of them self-dependent; you want to talk of the Ambulance Scheme, which has saved about 12,171lives; the School feeding programmes (OMEAL) through which school children are being fed and had in turn increased enrolment into public schools; what about the rehabilitation of the mentally challenged people; Agriculture Youth Academy through which several youths have been empowered in faming; what of the massive construction of schools from elementary, middle and high schools which can withstand any school at that level anywhere in the world, and many more.
Under Aregbesola, Osun has always remained a reference point for several states of the federation and even the federal government on series of his developmental interventions. Most pronounced of such interventions are the OYES and O’MEAL. If not for the ingenuity in the programmes, it is very rear in history, particularly in Nigeria for a Federal Government to adopt programmes instituted by a state government.
No doubt, the man that has changed the face of governance in Osun and Nigeria is worthy of celebration and must be celebrated in grand style, more so that his two-term administration is winding down. What has been baffling many is how to ‘reproduce’ another Ogbeni, that would be empowered and loyal to the course he has set.
As one of those leaders that have emerged and since been growing in the Aregbesola’s political lineage, it is a honour to join millions of friends, associates, politicians, family and other people nationality and internationally to say a very warm ‘Happy Birthday’ to the Symbol himself at 61 while I wish him a long life and prosperity. 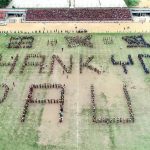 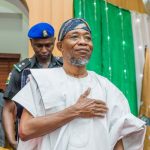