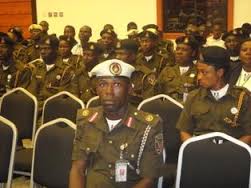 The National Unity and Peace Corps has offered to monitor the movement of cattle and other animals in the country in order to stop the frequent clashes between herdsmen and farmers.
The Osun State Commandant of NUPEC, Mr. Moses Ayodele, said this in a speech he delivered at the passing-out parade of members of the group in Ede, Osun State, on Saturday.

Ayodele promised that the corps would work hard to ensure national unity and peaceful coexistence in the country.
He added, “NUPEC will undertake animal policing and monitoring to avert incessant conflicts between herdsmen and farmers and also control, regulate, police and monitor other animals and serve as law enforcement body of animals in Nigeria.
“NUPEC will be involved in conflict resolution, total harmony and unity of neighbours and peaceful accommodation and tolerance among communities.”
He added that the corps would teach the youths to accept Nigeria as one nation and as people destined to live together as one family by ensuring that the North-South dichotomy was abolished.
The Osun State commandant of the NUPEC appealed to the Federal Government to ensure the speedy passage of the legislation seeking the establishment of the corps to start its operations without any hindrance.
The Commandant-General of the NUPEC, Dr. Chinedu Nneji, who commended the corps graduates for their commitment and endurance throughout the orientation course, urged them to remain disciplined.
The DG, who was represented by the Assistant Commandant-General, Fredrik Obidigwe, said the legislation to legalise the organisation would soon be completed.
He said the corps was committed to ensuring that Nigerians remained one irrespective of ethnic or religious affiliation.
The Deputy Governor of Osun State, Mrs. Titi Laoye-Tomori, lauded the corps, saying the state government would not relent in supporting the organisation and would assist them to succeed.
However, a chieftain of the Christian Association of Nigeria, Rev. Testimony Onifade, has said the activities of killer herdsmen in recent time suggested they have godfathers.
Onifade, a Special Assistant to CAN Vice-President, Rev. Supo Ayokunle, said the herdsmen could not be carrying AK-47 rifles and other sophisticated riffles without the backing of highly-placed people.
He stressed that government must ensure the arrest and prosecution of their sponsors to tackle the problem.
Onifade spoke in Igede Ekiti on Saturday during a Baptist Church of Nigeria special programme.
He said, “What the Fulani herdsmen used to carry are sticks and cutlasses, but today, they parade AK 47 rifles. Where did they get them?
“Their actions in recent time are barbaric and wicked. I can read political, tribal and ethnic colourations to the way they act. I want to believe that President Muhammadu Buhari, despite being a Fulaniman, cannot support such madness and he shouldn’t also keep quiet.”
Meanwhile, a socio-cultural organisation, Opiatoha K’Idoma, has expressed dissatisfaction with the way the Inspector-General of Police, Mr. Solomon Arase, has handled the killing of farmers by suspected herdsmen across the country.
The body believed that the IGP had not been proactive in stemming the tide of the spate of killings.