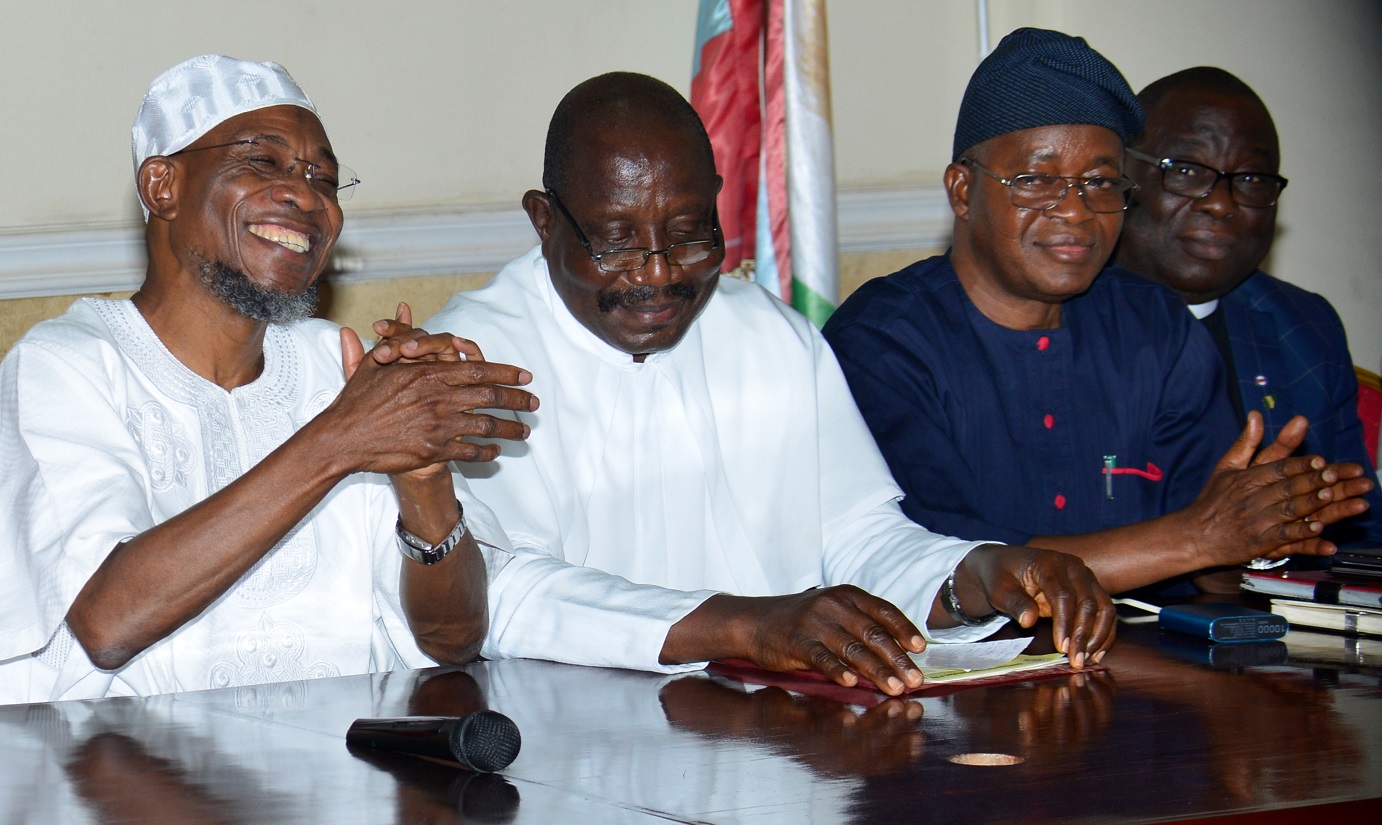 The Osun State Christian Association of Nigeria (OSCAN) has commended the Governor, Ogbeni Rauf Aregbesola, for his commitment to the development and transformation of the state in the face of present economic recession.

The Association also lauded the state government for being consistent in championing equity, balance and harmony among the adherents of the three major faiths in the state.

The Chairman of the Association, Very Reverend Michael Okodua who led the newly constituted Executive members of the Association gave the commendation during a courtesy visit to the governor his office in Osogbo. ‎

He held that the present administration under the leadership of governor Aregbesola has really done well in fostering peace, love and unity among the different religious faithful in the state.

He commended Aregbesola’s sagacity for continuously piloting the affairs of the state even in the face of huge condemnation and attacks from various quarters.

According to him, “It is expedient for us to commend and congratulate you on the success of your mission to transform Osun despite the glaring economic recession affecting the state and the country at large.”

The cleric stated that the purpose of the visit was to officially inform the state government on the new nomenclature of the Osun State Christian Association of Nigeria (OSCAN).

He said Osun State Christian Association of Nigeria remains a critical stakeholder in the development of the state, stressing that, “It is therefore incumbent on the Association to liaise and work with the Governor on critical issues bothering on state and religion, among others that would further enhance the general well being of the people of the state.

“Our goal therefore, is to promote peaceful coexistence and religious harmony, as basis for rapid socio-economic development of the state.‎ It is on this basis, that the Osun State Christian Association of Nigeria wishes to assure the government  of our loyalty, cooperation and unflinching support towards meeting the needs and aspiration of the people of the state.

“We also look unto your excellency for support, in our efforts towards meeting the aspirations and desires for the growth and development of the church in the state.

“We wish to assure your excellency that the church will continue to support you and your administration with prayers and goodwill at all times.

In his remarks, the Governor of Osun, Ogbeni Rauf Aregbesola charged the people of the state on the need to continuously champion religious tolerance as being demonstrated by his administration.

He thanked God for the opportunity given to his administration to renew its relationship with the newly constituted leadership of OSCAN, just as he expressed hope that the visit would put an end to possible misunderstanding among religious faithful.

According to him, it will be a grand mistake for us to deny the fact that, our administration and Osun State Christian Association of Nigeria have had a tumultuous relationship.

He added, “but the question to ask is why must a government who in all honesty wants to have harmonious relationship with all faiths to the extent of even given them recognition in their own specific rights have conflict with one of the faiths.
“We must bear it in mind that it takes two to tango just as it takes two to be harmonious. It is not possible for two people either individuals,  organisations or institutions to get along without a huge sense of maturity, forbearance and understanding.

“However, immediately those two people who must coexist and get along appreciate the need for forbearance by tolerating one another, maturity takes place. listening to the chairman’s speech, l want to believe that we are in a new season. New season has just began”. Aregbesola stated